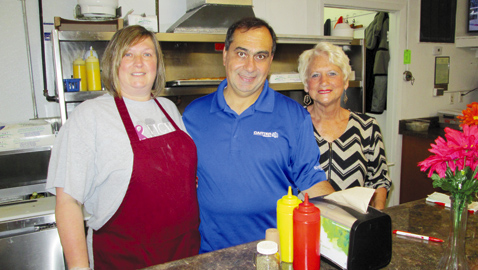 The instant you walk in you know exactly what draws South Knoxville residents to the Korner Market. The aroma of country cooking floats from the kitchen, promising a treat for your taste buds.

It’s old fashion breakfast and lunch at its best:, traditional, delicious, and plentiful.

“What makes us special is the home country cooking,” Nasser said, adding, “Both our cooks are local and we serve the best breakfasts and lunches.” Gail Valentine and Peggy Belcher are well known and take pride in not only their cooking but also in knowing most of the customers.

Back in October an old fuel tank had to be removed from the ground at the market. It exploded and damaged the market but no one was hurt during the incident. The Korner Market reopened recently with the same cooks and same friendly prompt service.

“We were lucky and blessed that no one was hurt— it happened during lunch hour,” Nasser said.

“We’re happy to be back open and I really appreciate the neighborhood’s support and the loyalty of our customers,” he told The Focus.

Nasser said the daily specials include Roast Beef on Mondays, Steak and Gravy on Tuesdays, Chicken or Pork on Wednesdays and Meat Loaf on Thursdays.

“Fridays are an open day,” he said, adding that the Korner Market is also known for its fresh cheeseburgers and Philly cheesesteak sandwiches.

People come from all around, from places like Seymour, Johnson Bible College, and many other South Knoxville communities, to eat at the Korner Market. There’s always a crowd at breakfast and lunch time.