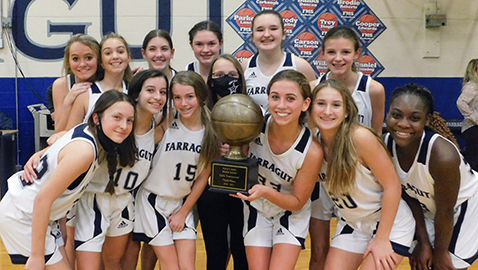 The Farragut Lady Admirals and Bearden Bruins earned the right to appear at the sectionals as they captured their respective consolation championships of the Knox County Middle School Tournament.

The Lady Admirals, the No. 5 seed in the girls county tournament, will make their third consecutive trip to the sectional round of the state playoffs as they captured their third straight third-place finish in Knox County with their 39-37overtime victory over Turkey Creek rival Hardin Valley.

Meanwhile, the Bruins moved on with a 50-41 victory over Powell.

In Farragut, the Lady Admirals overcame a 23-14 third-quarter deficit and used a late rally to force overtime after being down much of the contest thanks to some prolonged offensive slump against the sixth-seeded Lady Hawks.

The Lady Admirals were able to force overtime when Annie Priest tied the game 33-33 with a free throw with 13.5 seconds remaining in regulation.

Farragut never trailed in the extra frame and Priest made the game-winning free throw with 3.6 left.

“I wouldn’t want anyone else at the (free throw) line,” Lady Admirals’ second-year coach Devan McIntyre said of Priest, who scored a game-high 15 points, including six after halftime. “I’m so proud of these girls for the way they battled.

“Hardin Valley came in here to play and they played with all their heart. Our girls stepped up when they were under a lot of pressure.”

Madison Smith and Kamryn Butcher each scored 11 points for the Lady Hawks, who came up just short of making their first sectional appearance in their brief three-year history.

Hardin Valley Middle School coach Cara Cahak was emotional after the game, but said she couldn’t have been happier with her team.

“I’m so proud of these girls. We made history,” said Cahak, who was in tears. “We made it further than any Hardin Valley team.

“These are my girls and they’ll always be my girls. It’s been fun to watch them grow over the last three years.”

For Farragut, Sydney English had 12 points, including 10 after halftime to help the Lady Admirals culminate their comeback.

Meanwhile at Bearden, the Bruins got 19 points from Jack Keith, who knocked down five 3-pointers and 10 points each from Maurice Clark and Devyn Martin en route to nabbing a 50-41 victory over the Panthers.

Like McIntyre, Bearden coach Ben Zorio is happy to advance.

“I’m happy to get a chance to keep coaching and working with these young men,” Zorio said. “We’re supposed to play next Saturday and I just hope that we get to play. This year, you never know.

“We went almost a month between games between Dec. 12 and Jan. 6 or 7, and we didn’t have much practice time in there either. But tonight, we made some big plays and we were able to beat a really good Powell team.”

The Panthers had a trio of players post double figures in the scoring column. Conner Wheeler led the way with 17 points. Dylan Stooksbury added 12 and Lucas Mayes finished with 11.