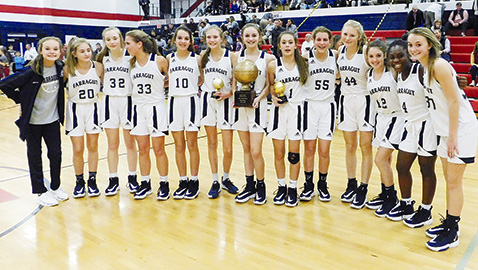 For the second consecutive year, the Farragut Middle School girls basketball team is headed to the sectional tournament.

The Lady Admirals punched their ticket to the tournament with a 40-33 victory over Gresham on Thursday afternoon in the James A. Ivey Jr. Memorial Middle School Basketball Tournament at South-Doyle Middle School.

Farragut ultimately picked up a win and notched its second consecutive third-place finish in Knox County, after winning two straight championships in 2017 and 2018, but the Lady Admirals struggled out of the gate, falling behind 9-2 early against the Lady Gladiators.

The Lady Admirals couldn’t contain Gresham’s Cadence Horner early as she scored her team’s first nine points of the contest, which carried a sectional tournament bid for the winner.

But the Lady Admirals closed out the opening frame with an 11-0 run and opened a 13-9 lead by the end of the inaugural stanza.

Farragut’s defense also silenced Horner after the first six minutes as she had one more basket, which came in the fourth quarter with the game’s outcome no longer in doubt.

“We knew coming in that (Horner) was a great player,” said first-year Farragut head coach Devan McIntyre. “We knew that she was their best player and we knew that we didn’t want her to beat us.”

The Lady Admirals, who finished third in the Knox County Middle School Basketball Conference and lost in the tournament semifinals to West Valley on Tuesday night, went through some struggles during the latter stages of the regular season and suffered a loss to rival Hardin Valley, overcame a slow start against the Lady Gladiators Thursday. But Farragut would find enough of a shooting touch to engineer a balanced scoring attack against the fourth-seeded Lady Gladiators.

“We’re a team that plays at our best when we share the basketball,” McIntyre said. “Ultimately, we have a chance to win a state championship and that’s our goal.”

Horner led all scorers with 11 points but the Lady Admirals did not have a single player post double figures in the scoring column. But they had eight players find their way into the scorebook.

Enderson and Pressley made the all-tournament team for Farragut. Gresham had Cadence Horner and Scout Horner named to the squad.