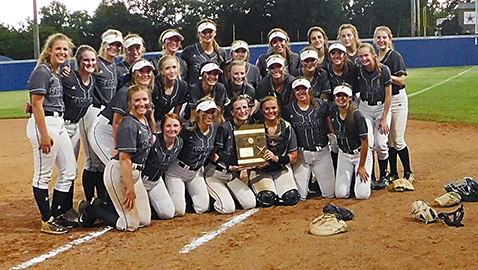 “At this point, Powell is the best team that we’ve seen this year,” Green said after the Lady Admirals outlasted the Lady Panthers 2-1 Wednesday night at Bellamy Field. “I’m not saying that there aren’t better teams out there.

“I’m just saying that we haven’t seen them and Powell is the best team that we’ve seen this year. This was the closest game we had since we played Gibbs and that was 3-1.”

Farragut (32-2) tore through District 4-AAA this season, posting a perfect 14-0 league record in one of the state’s toughest conferences. The Lady Admirals also posted a perfect run in the District 4-AAA Tournament.

Farragut and the Lady Panthers (36-8) are two of the top Class AAA teams in the state and both squads boast two of the top ace pitchers in Knox County.

And Farragut junior left-hander Avery Flatford and Powell senior ace Delayna Bryant were on full display Wednesday night in West Knoxville in the second meeting of the season between the two powerhouse programs.

The Lady Admirals downed Powell 17-7 in April but Wednesday night’s game was competitive.

“This was a great game,” Lady Panthers’ coach Jeff Inman said. “These are the games that you want to play.

“Flatford threw a great game,” Inman said. “I’ll give her credit for that.

“When you have two good teams like this, one play can usually make a difference in or decide the game.”

Powell squandered a chance to score in the first inning as shortstop and leadoff hitter Cayden Baker reached with an infield single and stole second.

Flatford then struck out the next two Lady Panthers before Farragut catcher Autumn Caywood gunned down Baker trying to steal third.

Baker had both of Powell’s hits, infield singles, in the game.

The Lady Admirals scored in their half of the opening frame and took a 1-0 lead on an RBI by Lauren Brakovec that plated Ace Strickland.

Strickland, Brakovec and designated player Hannah Pfeifer all singled in the first inning but Bryant, who yielded two runs and eight hits while striking out four, averted further damage when she fanned Anna Guzowski and induced an inning-ending groundout from Sarah Livingston.

The Lady Panthers pulled even in the top of the third when Alaina Watson drew a bases-loaded walk that brought home Leslie Hensley to make it 1-1.

Farragut pushed across the winning run in the third when Livingston doubled in Guzowski, who reached on a fielder’s choice.

The Panthers and Lady Admirals both played in state sectional tilts late last week. But results of those games were not available at press time.

The sectional winners advanced to this week’s Class AAA State Tournament in Murfreesboro.