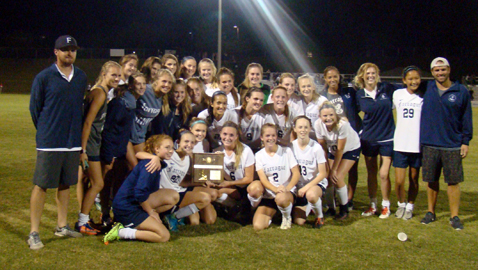 The 2017 season got off to a rough start for Farragut High School girls soccer team. Back in the hot dog days of August, the Lady Admirals opened their campaign by losing five consecutive matches.

Farragut won its 14th consecutive match Thursday night and its latest victory carried with it a District 4-AAA Tournament Championship as the top-seeded Lady Admirals outlasted Maryville 2-0 before a spirited crowd at the Farragut Soccer Stadium.

“This does feel really good,” Farragut coach Drew Payne said. “It feels good. But it feels especially good because of the way that we’ve been playing.

“I’m a little bit stubborn when it comes to the style that I like to play. I mean, I want to win games. And the way, we win is by possessing the ball. We’ve been doing that well lately and tonight, we epitomized that.”

The Lady Admirals (14-5) earned the top seed in the District 4-AAA Tournament by completing a perfect run through the regular-season district schedule, which included a 1-0 victory over the Lady Rebels on Sept. 28.

Maryville (10-4-5) had its share of chances early but fell behind 1-0 when Lady Admirals’ senior captain Megan MacLean scored with 46.5 seconds remaining in the first half.

“I thought, in the first half, that it was an even game,” Lady Rebels coach Steve Feather said. “But in the second half, Farragut just came out and they dominated.

“I think the Farragut team came out and they figured out how to open their shape and pass the ball around us. I don’t think that it was a lack of speed. Farragut is fast but we have speed too. I think our legs just gave out.”

Farragut clinched the match and tournament title when Emilie Guigou tallied in the 54th minute and she was thrilled to win a championship.

“We got off to a rough start and this is still a tough district,” Guigou said. “It’s always a tough game when you play Maryville.

“It was a rough start and we came back in here and we got back on our feet. Our seniors decided that we didn’t want our season to end like that.”

“I felt like we knew that we had that in us,” said MacLean, who was injured early in the season. “We’ve won 14 games in a row and this feels really good to us.”

Payne said that his first year as the Lady Admirals’ head coach has been enjoyable.

“This is a great group of girls and I wish I had them a little longer,” he said.

Both the Lady Rebels and Lady Admirals will advance to Tuesday night’s Region 2-AAA Semifinals. Farragut will host District 3-AAA runner-up Oak Ridge in an elimination match. The Lady Admirals shut out the Lady Wildcats 2-0 during the regular season.

Maryville will travel to Powell to face the Lady Panthers. Those two teams played to a draw in the regular-season finale for both schools. Powell notched a 6-0 victory over Oak Ridge at home in Thursday’s District 3-AAA Championship Game.

Bearden coach Ryan Radcliffe said he was pleased to see his squad get off to a blazing start against West High.

“I thought we came out and played well,” Radcliffe said. “We had a lot of our better games and some of our stars really stepped up. A lot of the credit goes to our senior class.

“You always want to be playing your best at tournament time because if you don’t play your best, anything can happen. It doesn’t matter that we changed districts.”

The Lady Rebels and Lady Bulldogs were both in District 4-AAA before moving in 2017.

Both teams move on to the Region 1-AAA Tournament Tuesday. Bearden will host Kingsport Dobyns-Bennett, which lost to Science Hill in a penalty kicks shootout.

West will travel to Johnson City to face the Hilltoppers.