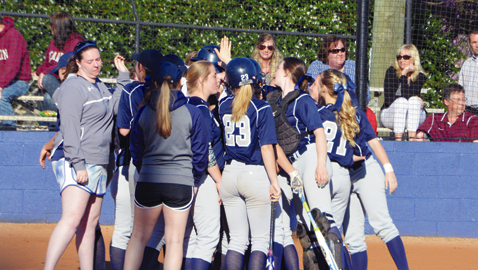 After opening the 2016 season by losing four of its first six games, the Farragut High School softball game is in the midst of a three-game winning streak.

The Lady Admirals (5-5 overall, 3-1 in District 4-AAA) opened the week with a 14-0 victory over rival Bearden Tuesday night at Bellamy Field. They outlasted William Blount 2-1 on Wednesday and routed Heritage 10-0 on the road Thursday night.

Against the Lady Bulldogs, Farragut scored early and often. After starting pitcher Kayla Hindle retired Bearden (0-3, 0-2) in order in the top of the first inning, the Admirals sent 12 batters to the plate in their half of the frame.

Farragut, which has had its offensive struggles out of the gate, scored eight runs in the opening inning. Seven of those runs crossed the plate before the Lady Bulldogs even recorded an out.

Farragut leadoff hitter Niki Slone drew a walk to start things for the Lady Admirals. She stole second and advanced to third with a passed ball. She came home with the game’s first run when Kelsie Tuggle doubled.

The Lady Admirals took a 3-0 lead on a two-run single by senior first baseman Mary Claire Coyne. Farragut scored another run when Andrea Sarhatt reached on an error.

Hindle had a run batted in on a sacrifice fly. Slone had an RBI single in her second plate appearance of the inning and Tuggle’s two-run double made the score 8-0.

Bearden’s frustration had to hit a peak in the top of the second as both Rachel Colwell and Micah Stair both hit the ball hard but came up empty thanks to a pair of defensive gems by Farragut right fielder Sam Caruso and Slone at shortstop.

Madison Etter, who had a one-out triple also scored on Weller’s round tripper.

Designated player Bailey Young had an RBI double and Coyne had a scoring single before the frame concluded.

The Lady Bulldogs got their first base runner in the third as Piper Rucker walked. She, however, was retired when Jessica Ray rapped into a double play.

The Lady Admirals extended their advantage to 13-0 in the third on an RBI single by Morgan Stapleton.

Bearden picked up its lone hit of the contest when shortstop Jersey Patterson got aboard. She was one of only three Lady Bulldogs to reach base in the contest.

Emma Geron closed out the scoring with an RBI single that drove home Caruso, who singled early in the inning.

Hindle and Callie Moore combined on the one-hit shutout for the Lady Admirals.

“We hit the ball well and Kayla and Callie pitched well. I think we only gave up one hit. This was a good game for us and Bearden is still a rivalry game for us.”