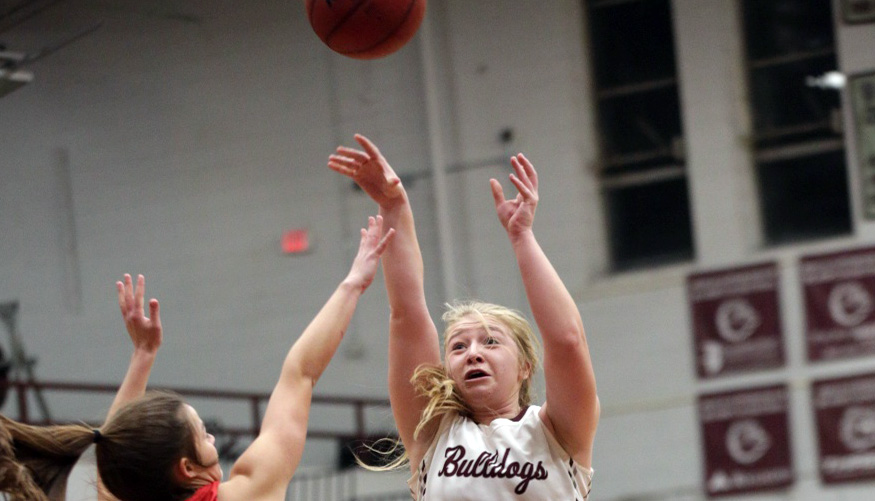 Bearden High School girls basketball coach Justin Underwood has often said that he counts his blessings as head coach of the Lady Bulldogs.

And Tuesday night showed everyone why Underwood is extremely happy with his job in West Knoxville.

“These girls are a blessing to coach. They’re unselfish and they love to share the basketball,” Underwood said after Bearden notched a 62-45 victory over Maryville Tuesday night at home in its District 4-AAA opener before a spirited crowd. “I love these girls. I’m on them but I love them and if you look at our (bulletin) board (outside the Lady Bulldogs’ locker room), you see that we have seven (graduates) playing college basketball.

“And these (current) girls could go to other schools and average more points, but they’re unselfish and they share the basketball and they sacrifice and they play their roles. We have a good group that plays hard, and that’s a coach’s dream.”

Bearden, which kept its perfect record intact with the victory over the Lady Rebels (6-2 overall, 1-1 in District 4-AAA), again boasted a balanced scoring attack and had three players post double figures in the scoring column.

But Davis, a dominant force in the post for Bearden, who has also proven that she can knock down jumpers from beyond the 3-point arc, received plenty of help from a supporting cast that included Emma Stone, Zneyah McLaughlin, Ja’niya Bussell and Emily Gonzalez.

Stone had 16 points and made four 3-pointers while McLaughlin came up huge in the fourth quarter, scoring all 11 of her points over the final eight minutes.

Bussell scored seven points and Gonzalez finished with six for the Lady Bulldogs, who held a 19-9 lead at the end of the first quarter.

Bearden led throughout the contest between a pair of area heavyweights but McLaughlin helped the Lady Bulldogs, who led 26-19 at halftime and 40-34 heading to the final frame, put the finishing touches on a key early-season district victory. She not only scored in bunches, but she had crucial steals and rebounds down the stretch as the Lady Rebels desperately attempted to hang around.

But big performances are nothing new for McLaughlin.

“She came up huge for us in the fourth quarter, but she’s done that before,” Underwood said.

Maryville’s Denae Fritz and a game-high 18 points and pulled down 12 rebounds.