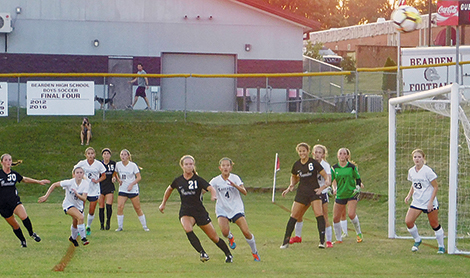 But it didn’t take him long to like what he saw as the Lady Bulldogs notched a 4-0 non-district victory over Kingston Pike rival Farragut before a spirited crowd at Turner Allender Field.

“We knew this was a rivalry game and we knew that emotions would be running high,” Radcliffe said after his team notched a second consecutive victory over the Lady Admirals, who were battling a number of injuries. “We knew that if we could get a goal, we could take all the emotion out of the game.”

The Bearden-Farragut soccer rivalry may have lost some of its luster since the match is no longer a district tilt, but don’t say that to Bearden junior Alex Smith, who scored the game’s first goal on a hot and humid Thursday night.

“We’ve won two in a row now against Farragut,” said Smith, who opened the scoring with a marker in the sixth minute after she was awaiting a rebound in front of the Farragut net. “We beat them [in the state sectional] last year. But we lost to them in the regular season. I didn’t play varsity as a freshman, but I know [the varsity team] lost.”

“It’s Farragut and it’s the game that you look forward to all year. When you lose it, it’s a big heartbreak.”

The Lady Bulldogs took a 2-0 lead when Taylor Cross tallied in the eighth minute. Bearden would extend its advantage to 3-0 when Kaylin Scott, a freshman scored in the 39th minute.

After that the game wasn’t in doubt as the Lady Bulldogs outshot the Lady Admirals (5-6) 14-0 over the first 40 minutes.

Things would’ve been much worse for the Lady Admirals if not for the effort of freshman netminder Caroline Ekern, who made 17 saves in the contest.

“She played a good game and made some big saves for us,” Farragut coach Drew Payne said of Ekern. “They [the Lady Bulldogs] are fast and they’re athletic.

Payne, Farragut’s second year head coach, said the injuries were problematic for his side.

“We were without five starters and that certainly doesn’t help. We’re already pretty young. We had a car wreck, two weeks ago, the night of the Farragut-Oak Ridge football game. That took four of them out.

“They wrecked going to that game.”

Bearden scored the game’s final goal when Abby Brewer converted a penalty kick early in the second half. She buried the set piece in the 46th minute.

While the Lady Admirals are battling injuries, Bearden is finally getting healthy as the 2018 regular season heads into its home stretch.

“We’re a physical team and we’re finally getting healthy,” Radcliffe said. “We’re getting some of our more physical players back.