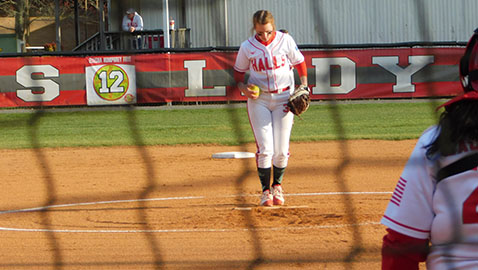 Throughout the early part of the 2019 softball season, Halls High School has battled some offensive inconsistency.

This, despite the fact, that the Lady Devils have scored 49 runs in their first three games.

“We’ve been a little inconsistent,” Lady Devils’ coach Bryan Gordon said. “But the girls are working hard for me. They’re playing hard and that’s all I can ask of them.

“I have a great group and I’m waiting for them to find their stride. The more we play, the better off we’ll be. We’ll get better as we see more pitching. These are great girls and I’m looking forward to seeing what we can do with them, I’m interested in seeing how far they can go.”

Gordon certainly had to like much of what he saw Wednesday as the Lady Devils pounded out 14 hits and drew four walks.

“We teach them to be patiently aggressive,” Gordon said.

The Lady Devils (3-0 overall, 3-0 in District 3-AAA) took a 1-0 lead. Lamon walked two batters in the frame and one, Halls shortstop, Tanna Hensley scored on a double by Aspen Calloway.

They would add three more runs in the second as Bri McMillan clubbed a two-run homer, her first of her high school career, and Hensley had an RBI single.

Halls expanded its advantage to 7-0 in the third as pitcher Bri Blair had a two-run double and Sloane Baldridge added an RBI single.

Blair’s RBI double plated Lauren Lawson in the bottom of the fourth to make the score 8-0.

Blair was also stellar in the circle. She retired the first 11 Karns batters she faced. She allowed three hits and a walk.

She struck out five and kept the Lady Beavers at bay until the top of the fourth when Karns center fielder Elizabeth Breeden singled with two outs. She stole second before Kate Swafford drew a base on balls.

Blair escaped damage when caught Lamon looking for the third out of the frame.

Karns picked up two more hits in the top of the fifth as pinch hitter Amanda Weaver and second baseman Lexie Baker both singled with two out.

Blair again wiggled off the hook when she caught A.K. Reichter looking.

Halls ended the game with two runs in the fifth. Hensley drove in the game’s ninth run with a groundout and Calloway helped the Lady Devils invoke the 10-run rule when her double scored Baldridge, who reached on an error earlier in the frame.