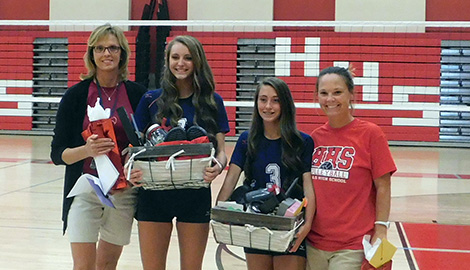 It took just 37 minutes for the Halls High School volleyball team to complete a sweep in in its final home match of the 2018 season.

The Lady Devils, who have had a roller coaster ride this season, made short work of Fulton in a 25-10, 25-13 victory Tuesday night in a match that was the final home tilt for seniors Lauren Lawson and Mayci Mason.

Lawson and Mason both joined the volleyball team late. Neither played for four years.

“This is the first Senior Night where my seniors haven’t played but it wasn’t for any lack of effort,” Carroll said during pregame ceremonies. “I tried to get them to come out when they were freshmen. I told them that they would enjoy it.

With the District 4-AAA Tournament looming, Carroll took time to reflect on the 2018 campaign after the win helped her squad improve to 13-11 on this season.

“I’ve really enjoyed the season,” she said. “I have a great junior class. I have a big junior class and hopefully, they’re getting some valuable experience to prepare for next year.

“They’re a great bunch of kids.”

Halls certainly didn’t have any problems with the Lady Falcons Tuesday night. The Lady Devils got off to a fast start when Morgan Ward served up four consecutive points, all aces to give the home team a 4-0 lead.

The Lady Falcons would respond and tie the opening set, thanks to a side-out and three service points by Isabella Gregg.

The Lady Devils, however, quickly regained control of the game and took a 10-4 as Cailyn Weaver engineered a big service run that all by sealed Fulton’s fate in the opening set.

Halls would open leads of 16-6 and 24-8 before winning the first set in impressive fashion. It took the Lady Devils just 16 minutes to take a 1-0 lead in the match.

The second set was a bit more competitive early. The Lady Falcons never led in the match. But the teams were locked in a 5-5 tie before Halls overpowered Fulton to pick up the victory in the best-of-3 match.

Ward scored seven points in the match while Cassie Norris had nine points, six kills, three digs, one assist and one block.