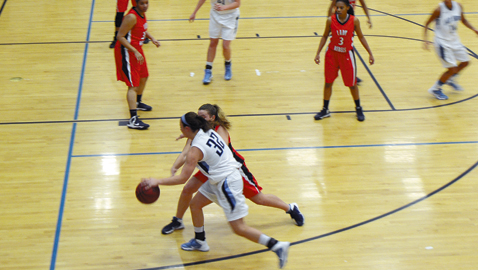 The Lady Hawks would eventually celebrate Senior Night with a 75-59 District 4-AAA victory over the Lady Rebels but HVA had trouble in the first half.

West (1-20 overall, 0-12 in the district) led throughout much of the opening half and opened a 25-12 advantage midway through the second quarter on a pair of foul shots by Brianna Tate.

The first few chapters of this Senior Night saga might have belonged to the Lady Rebels but HVA coach Jennifer Galloway and the Lady Hawks (11-11, 5-7) didn’t panic.

Galloway implemented a full-court pressure defense that would eventually force things to come unraveled for the Lady Rebels.

The Lady Hawks steadily and methodically chipped away at the deficit. They closed the second stanza on a 16-8 run and trailed 33-28 at halftime.

“Our kids played hard but it just took us awhile to find our grove,” Galloway said. “We didn’t have any practice time because of the snow.

“We’re a team that does better with structure.”

After halftime, the Lady Hawks continued to press and trap and force the Lady Rebels into turnovers. Hardin Valley turned the West High miscues into transition baskets.

Hardin Valley opened the third quarter with a modest 8-2 run and took the lead for good when Lacy Cantrell converted a three-point play to give the Lady Hawks a 36-35 edge with 5 minutes, 35 seconds remaining in the third quarter.

Hardin Valley, which led 52-44 by the end of the third quarter, really blew things open when its pressure defense really kicked into high gear.

The Lady Hawks scored the first 10 points of the final stanza to open a 62-44 advantage and all but put the Lady Rebels away.

Hardin Valley senior guard Katie Smartt sparked the fourth-quarter surge by scoring 10 of her 18 points in the fourth quarter.

Smartt said that she’s hoping that this victory will propel the Lady Hawks to success.

“This will be a real confidence booster for us,” Smartt said. “We’ll probably see them again in the district tournament.

“When we play as a team, I think we can play with any team in our district.”

Monica Hundley added 13 points for the Lady Rebels, who led 16-8 after the first quarter.