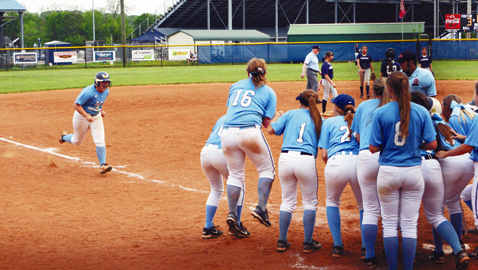 It took eight innings but the Lady Hawks, who made the Class AAA State Tournament for the first time in 2015, finally picked up a road win over the Lady Admirals when a 7-4 victory.

It was an unlikely hero who put Hardin Valley (16-10 overall, 7-5 in District 4-AAA) in the top of the eighth inning Thursday. Catcher Jayden Blosser usually doesn’t hit in HVA’s lineup, but she batted in Farragut and drove in the go-ahead run when she singled home Leslie Beecham with one out.

The Lady Hawks later got some insurance from a steady force in their batting order when senior first baseman Kaleigh Wynne belted a grand slam home run to seemingly put the game out of reach.

But it turned out that the Hawks would need Wynne’s long ball because the Lady Admirals (16-12, 8-3) didn’t go quietly in the bottom of the frame.

Farragut scored two runs in its half of the eighth when designated player Morgan Stapleton had a two-run double before Lady Hawks reliever Mikaela Chavis recorded the final two outs of the contest, leaving the potential winning run stranded on first base.

The Lady Hawks took an early lead with a clutch two-out rally in the top of the first. Chavis scored the game’s first run when shortstop Jodie Parham singled.

Parham, who went 3-for-4 and drove in two runs, gave Hardin Valley a 2-0 lead when she singled Wynne home with one out in the top of the third.

The Lady Admirals pulled to within 2-1 in the third when Mary Claire Coyne’s hit plated center fielder Andrea Sarhatt.

Farragut tied things in the fourth when an Emma Geron grounded out. Pitcher Callie Moore scored on the play. Moore singled and stole second. She advanced to third on a single by Delaney Weller before coming home with the tying run.

Farragut coach David Moore said his team had its chances.

“We missed our opportunities in the seventh.”

In the seventh, Niki Slone drew a leadoff walk. She was the last hitter that Hardin Valley starting pitcher Emalee McCord faced. Chavis entered and recorded two outs before intentionally walking Coyne. Lexee Lamoree then lifted a deep fly ball to center before Chavis extinguished the threat by inducing a groundout from Kelsie Tuggle.

McCord, a freshman, and Chavis have been pressed into pitching service since Wynne’s (the team’s ace hurler) suffered a broken finger on her pitching hand.

McCord sparkled although she got a no-decision. She struck out eight and walked one while scattering eight hits and surrendering two runs before giving way to Chavis.

“We found it today but we’ve got to keep improving.”

Parham said that the road win against the Lady Admirals was huge for Hardin Valley’s program.

“The coaches kept telling us that we’d never beaten Farragut in Farragut,” Parham said. “Today, we came together.

“I think we’re at our best when we play for each other.”