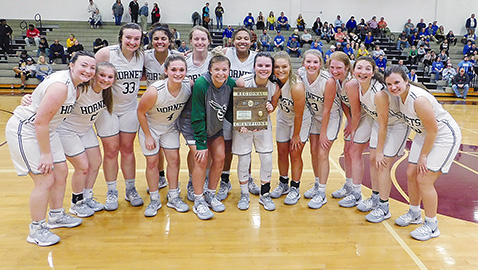 Coach Bo Lewis was counting his blessings Tuesday night after he guided the Lady Hornets to their first region championship in nearly two decades.

“I’m so excited for the girls, our community and our program,” Lewis said after watching the Lady Hornets come up on the winning end of a 63-61 thriller in the Region 2-AA Championship game against Gatlinburg-Pittman at Fulton High School’s Jody Wright Arena.  “It’s been a long time coming for the Lady Hornets’ program. I’m just happy to be a part of it and sharing this experience with the girls.”

It was the fourth meeting of the season between Carter (22-10) and the Lady Highlanders (21-11) and Gatlinburg-Pittman had won two of the previous three, including notching a 70-55 victory in the District 3-AA semifinals, a game where Gatlinburg Pittman dominated the glass, according to Lewis.

“They killed us on the boards in the district semifinals. They outrebounded us 46-25,” Lewis said. “We did a much better job rebounding tonight.”

“This was a great game, wasn’t it? I’ve had these girls for a long time. I’ve had them for four years, here, and then, I had most of them in middle school for two years,” Lewis said. “They’re a great group of girls and they work extremely hard.”

The Lady Hornets led 48-46 after the third stanza and they built their advantage to 55-48 when senior Jordan Heifner knocked down a 3-point shot with 5 minutes, 42 seconds remaining in the contest.

But Carter got a little careless with the basketball and committed four turnovers on its next four possessions.

The Lady Highlanders couldn’t convert those miscues into points. Gatlinburg-Pittman would, however, pull to within 55-54 when Shelby Moore buried a long-range jumper with 2:02 left to play.

But the Lady Hornets took a 61-54 lead on a pair of free throws by Emily Irwin with 40.4 seconds left.

Gatlinburg-Pittman closed the game on a 9-2 run but Heifner iced things for the Lady Hornets as she converted a pair of foul shots to make it 63-58 with 10.1 seconds left.

Moore’s late 3-pointer made things a bit closer but Carter celebrated wildly when the final buzzer sounded. This game was a nail-biter, but likely paled in comparison to Carter’s last region title in 2001.

The Lady Hornets won that one when they beat Kingston in five overtimes.

Carter boasted a balanced scoring attack with Sydney Hurst, the tournament’s Most Valuable Player, leading the way with 18 points.

Zarria Clark scored 16 and made a pair of crucial free throws down the stretch. Heifner finished with 12 points. Evie DePetro had nine and Emily Irwin chipped in with eight.

Clark, Heifner and DePetro were also named to the all-tournament team for the Lady Hornets.

Carter and the Lady Highlanders both advanced to Saturday’s state sectionals but results were not available at press time.