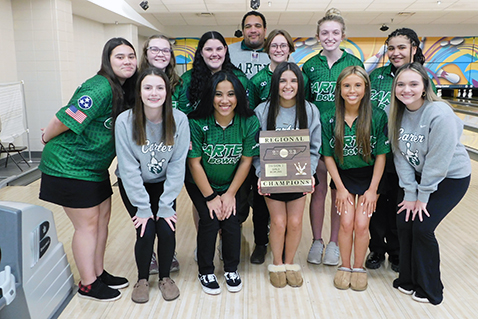 The Lady Hornets (15-0) pulled out a 15-8 win Tuesday at the Pigeon Forge Community Center’s bowling lanes to notch the championship and were to face Region 1 runner-up Kingsport Dobyns-Bennett Saturday at Fountain Lanes in the Sectional round with a TSSAA state berth on the line.

“Gibbs is the most improved team in our district and they’ve been aiming for us all season long,” said Carter Coach Ray Wynn. “They’ve given us two close games this season, so (we knew) they were going to give us all they had.”

Wynn added: “We just try to stay steady with our game. We try not to get too high or too low. We try to keep ourselves even keel.”

The Lady Hornets stung the Eagles 836 to 787 in the opening American Traditional 10-pin game, where six players on each team bowl a full game.

The Lady Eagles showed that they weren’t going away easily with a 176 to 156 win in the first of five Baker games (where five players on each team bowl two frames).

Carter finished strong to win the second Baker game 135 to 120 as Rucker scored a strike in the eighth frame and Miller picked up a split in the ninth.

Gibbs nipped Carter 149 to 147 in Game 3 as Mitchell converted a 6-10 baby split in the seventh frame and Smith made a crucial spare in the 10th.

Gibbs won the final game 130-121 but couldn’t make up enough ground to catch Carter in total match pin fall, which is worth three points in the final team scoring. The difference in total pin fall in the match was 61 pins.

“We were real excited after the first game with (District 4 champion) William Blount (in the semifinals),” said Gibbs Coach Rick Honeycutt. “They were undefeated and we came in here and beat them (21-2).

“This was the fourth time we’ve played Carter this season and that was the closest it’s been yet. It was very exciting. The girls played awesome. They kept good attitudes and stayed positive.”

Gibbs was scheduled to play Cherokee High, the Region 1 champion, in Rogersville Saturday. A win in the Sectional would propel the Lady Eagles into this week’s state tourney.

“This season has sort of been a Cinderella story,” added the Gibbs coach. “We have only one bowler on the team that bowled last year. The team is made up of five softball players, four volleyball players and two chorus members.”

Carter had a four-year record of 52-11 in girls bowling going into Saturday’s Sectional round.