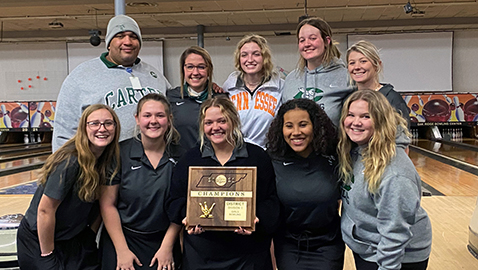 It didn’t take long for Carter High’s girls bowling team to make its mark in District 4.

In just its second year of having a team, the Lady Hornets stung Bearden 20-7 in the championship match Friday at the Oak Ridge Bowling Center.

“I think it’s really important because this is a big step for us in Carter (sports) history,” said senior Elizabeth Umbarger. “It’s our second year as a team and our first big win. It’s really meaningful to all of us.”

The Lady Hornets (13-1) will advance to the Region 2 tournament Tuesday at Crest Lanes in Maryville and roll against William Blount, the District 3 runner-up, at 11:30.

District 3 champion Sevier County tangles with Bearden at 1:30. The two winners automatically qualify for the Sub-State will battle for the region title at 3:30.

Carter’s path to the district crown included a 25-2 win over Hardin Valley Academy in the first round and a 26-1 thumping of Career Magnet Academy in the semifinals.

Bearden had eliminated South-Doyle 21-6 in the opening round and got past L&N STEM Academy 16½ to 10½ in the semis.

Senior leadoff bowler Ava Brooks and No. 2 bowler Hallie Lane, a sophomore, got Carter off to a fast start by bowling 165 and 161, respectively, in the opening game of the three-game match.

Brooks added a 138 game and Umbarger a 132 in the middle game of the series.

Gracie Miller finished with a 149, Lane a 146 and Kayla Rucker a 131. Miller and Rucker are freshmen.

“We just do what we do,” said Carter Coach Ray Wynn. “We come out here, bowl and have a good time. Enjoy each other and have an opportunity to play.

“These girls are great friends. They love each other. A lot of them are on the softball and volleyball teams together, and so they know each other. They’re always with each other.”

Coach Wynn said his team got rolling in the second half of the season.

“We lost early in the season to L&N STEM Academy and they had some really good bowlers,” he said. “In the second half of the schedule, we played them again and we really started hitting our stride. Our girls started executing and having high scores. It’s a tribute to these girls. They’ve put in a lot of work and dedication into this. It meant a lot to them.”