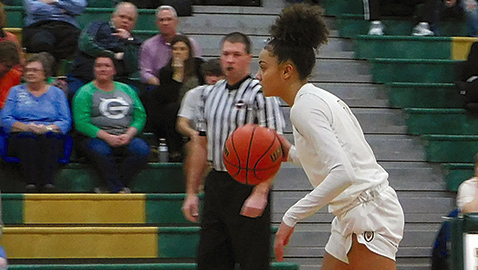 Knoxville Catholic High School’s girls basketball team has made great strides this season and the Lady Irish have one of the area’s most improved teams under second-year coach Freeman Pinkney.

Catholic struggled mightily Thursday night and despite putting up a valiant effort at home, the Lady Irish came up on the short end of a 62-38 decision against Greeneville.

The Lady Devils have had their struggles this season as their 12-12 record would indicate. But Thursday night, Greeneville had little trouble with Catholic (11-11).

The Lady Devils got off to a fast start, but the Lady Irish hung tough and were only down 26-17 at the end of the first quarter.

But in the end, Greeneville just had too much firepower. The Lady Devils blew things open and held Catholic scoreless for nearly five minutes in the second stanza.

The Lady Irish finally found their way back on the scoreboard when Jazmin Williams converted a free throw with 3 minutes, 17 seconds remaining until halftime. Her foul shot made the score 33-18. Kate Pettinger added a 3-point field goal a short time later to pull the Lady Irish to within 33-21. Williams had a basket later in the frame for Catholic, which trailed 40-23 at halftime.

But Greeneville was hot after the break and outscored the Lady Irish 18-4 in the third stanza to open a 58-27 lead.

The Lady Irish had their share of offensive troubles throughout the evening. They, however, manufactured enough punch to keep the 35-point mercy rule from being invoked over the final eight minutes.

Williams also left the game with an injury and did not return. She scored 13 points before exiting the contest in the third quarter.

She was one of only four Lady Irish players to score against the Lady Devils on this night.