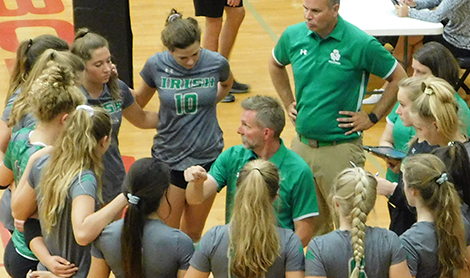 It was a busy week for the Catholic High School volleyball team. After taking the holiday weekend off, the Lady Irish returned to the court Tuesday night.

The Lady Irish had some different players step up against the upstart Lady Bobcats (6-10 overall, 0-1 in the district.

“We had some players come in and play tonight and those players don’t get a chance to play very much,” Lady Irish coach Brent Carter said. “Those players came in and they did a great job.

“We passed the ball well.”

Catholic had its share of struggles early against Central, which is in the midst of a rebuild under second-year head coach Lorri Johnson.

“We had some girls who rarely get to play and two of them, Grace Bobo and Connor Knott are seniors. They both did a great job. We did a good job passing the ball tonight.”

The Lady Irish also started fast in the second set, darting out to a 12-2 lead. Catholic also led 24-13 before a long service run by Leigha Gregory helped the Lady Bobcats and pull to within 24-21 and forcing Carter to call a timeout.

Gregory, who would score nine consecutive points on the run, added two more before Catholic finished off the set.

Catholic won the decisive set easily. Johnson said that the match against the Lady Irish was typical of Central’s season thus far in 2018.

“For us, it’s all about consistency and we weren’t consistent. At times, our hustle wasn’t there. At other times, it was.”

Maya Alves had 17 kills for the Lady Irish, who also posted victories over Christian Academy of Knoxville Wednesday and Fulton Thursday. Carlee Hart finished with seven kills against the Lady Bobcats and Maddie Vanderhoofven added six. Cassie Kuerschen had 20 digs.

For Central, Grace Cochran, Clarke Blakemore and Cameron Flatford had three kills each.

Catholic followed up Tuesday’s win with a 25-8, 25-12, 25-13 win over the Lady Warriors in a match that saw Olivia Cunningham record 18 kills. Alves added nine and Hart finished with eight. Kuerschen had 14 digs.

Catholic routed the Lady Falcons 25-9, 25-4, 25-4 in another district match Thursday night. The Lady Irish played at a tournament in Louisville, Ky. Friday and Saturday but results were not available at press time.