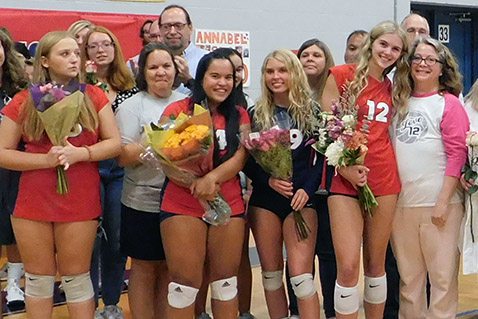 Senior Night is always a cause for celebration. But it can also bring an extra element of stress.

West High School’s volleyball team, however, got everything it wanted as it honored its seniors Tuesday night.

“The last three, four or five years, we’ve lost a set or two on Senior Night,” Lee said. “It’s hard but I told them that they needed to enjoy this.”

“This is a special group of kids. I’ve had three play on the varsity since they were freshmen and two since they were sophomores,” Lee said. “They’re special. They really are.

“They’ve just always been here and now, I’m going to have to take a look at what we’ve got coming up.”

The West High Volleyball Class of 2022 won a district tournament championship, made three Region 2-3A Tournament appearances and reached the sectional round of the state playoffs once.

They’re writing the final chapters of their story in the program, which likely includes one more deep postseason run.

The Lady Rebels followed Tuesday’s victory with a loss to Bearden Wednesday. They bounced back to defeat Halls Thursday in a district match.

West (23-5 overall, 11-1 in the district) has two district matches remaining. The Lady Rebels travel to Campbell County today (Sept. 26). They’ll play a pair of non-league tilts Tuesday as they travel to Anderson County to play the host Lady Mavericks and Jefferson County.

West will close out district play at Clinton Wednesday at 6 p.m.

The winner of that match will claim the second seed in the upcoming district tournament.