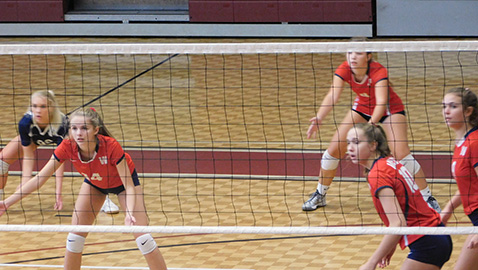 The No. 2 seed Lady Rebels lost their best player, senior setter Sophie Cain, to an ankle injury in practice last Monday. The Appalachian State University commitment was the district MVP during the regular season.

Without Cain, West still managed to get past Powell in Thursday’s semifinals to qualify for the Region 2 tournament before falling to top seed Oak Ridge in the district championship match at Bearden High.

“Hopefully, Sophie will be able to play by Tuesday (the day of the region tourney),” said West Head Coach Jessica Lee, after her team eliminated Powell 25-10, 27-25, 25-14 in the do-or-die semifinals. “We still took care of business and advanced, even though we had to play with people who had never (played the set position).”

Powell, the No. 6 seed, had upset No. 3 seed Halls in the quarterfinals.

West battled Oak Ridge close in the opening set of the title match and led 6-4 early. A 9-2 run by the Lady Wildcats, however, turned things around and put OR ahead 13-8. A successful return shot by West’s Avery Jolley and two winning serves by lefty Karly Kamman cut the deficit to two.

Jacinda Huff’s serve put West ahead 17-16 and a forceful return shot by Mary Austin Slate pulled the Lady Rebels even at 20-all. West then grabbed the lead 22-20, but didn’t score again.

Tourney MVP Ainsley Patrick took over at the end, scoring two of Oak Ridge’s last three points as the Lady Wildcats captured the opening set 25-22. Her first point came on a block at the net. Her set-winner was a powerful return from left front court to deep right on the West side.

Oak Ridge built a 19-6 advantage in the second set and again Patrick’s strong play at the net produced a 25-12 decision.

The Lady Wildcats pulled into a 3-3 tie early in the third set, despite two great saves by West freshman libero Kara Brantley.

Ahead 12-9, Oak Ridge steadily pulled away for another 25-12 win that clinched the title.

“We came out real slow in that first set, and between sets we got our minds together, and I told them to go out and have some fun and just play volleyball,” said Oak Ridge Head Coach Dave Kolodney, whose team raised its record to 33-4 overall and remained unbeaten this season against district opposition despite not having any senior players.

As an outside hitter, Patrick starts way off the court, allowing her to see the whole floor and time to recognize the defense before she roars in to make a play.

Patrick had 14 kills against Karns and a career-high 23 against West.

The district title was Oak Ridge’s fourth in a row under Kolodney. “It’s a nice little notch in the belt, but in the end it’s just one step,” he said. “We make the state our goal each year.”

His teams haven’t been able to get beyond the region tourney the past three years.

“We came out and played really well in the first set,” said West’s Coach Lee, “then I think we started to get tired because we had people playing all the way around that aren’t used to having to do that. Our hitters had to play setter and we’re not used to having to do that without having someone come in and play the back row for them. We just ran out of steam towards the end of the second and third sets.”

Oak Ridge will play Farragut and West (27-7) will face District 3-AAA champion Maryville in the Region 2 tourney Tuesday at Oak Ridge High with the semifinals set to start at 5:30, followed by the championship match. The top two teams qualify for Thursday’s state sectionals.

Coach Kolodney said Oak Ridge defeated Farragut in their only meeting this season and split their two matches with Maryville.