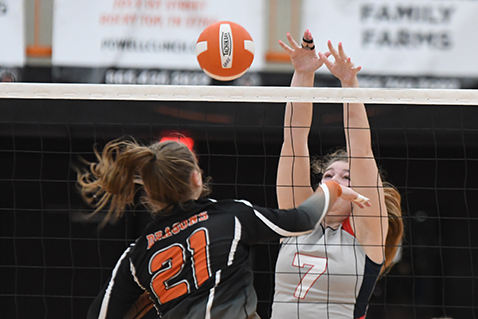 Clinton — Last week was a roller coaster ride for the West High School volleyball team. The Rebels, however, closed out the week by claiming the ultimate regular-season prize.

They had to have some help but they received it. West, however, took care of its own business Wednesday night when it swept Clinton, 25-20, 25-22, 25-10 at the Don W. Lockard Gymnasium.

The Lady Rebels (25-7 overall, 13-1 in District) will be the No. 1 seed in the upcoming postseason tournament, which opens at Karns High School Wednesday.

They closed out the regular season last week by playing four matches in three days. West opened the week with a victory over Campbell County on Monday, Sept. 26.

Tuesday, however, was a night of land mines when the Lady Rebels lost a pair of three-set matches to Jefferson County and the host Lady Mavericks at Anderson County High School.

“I know these girls are tired. This is our fourth game this week and a lot of my girls are in the (International Baccalaureate Program) and they have to do their homework,” West coach Jessica Lee said. “We beat Campbell County Monday and then we had a tough night Tuesday. We won the first set against Anderson County and then we won the first set against Jefferson County and lost that one.

“Then, we had to come back out here and we knew this match was going to be tough. Nothing is easy in our district. Oak Ridge is good. Clinton’s good, we’re good and Karns is good.”

The Lady Rebels had their hands full with the Lady Dragons (22-10, 10-4). West fell behind in the first two sets but rallied to erase deficits. Clinton tied the first set 20-20 before the Lady Rebels took a 21-20 lead on a side-out before winning the match on four consecutive points, including an ace by Ryn Gaertner.

Clinton jumped out to a 10-6 lead only to see the Lady Rebels storm back.

“I thought it was going to be more of the same tonight,” Lee said. “We came out flat. I told them that we were going to have to take care of business.”

The Lady Rebels responded by cruising in the third set.

West was in position to lock up the tournament’s top seed because Karns upset Oak Ridge on Monday, Sept. 26.

“I told them that we had to take care of business because we got a gift from Karns,” Lee said. “I’m really proud of them.”