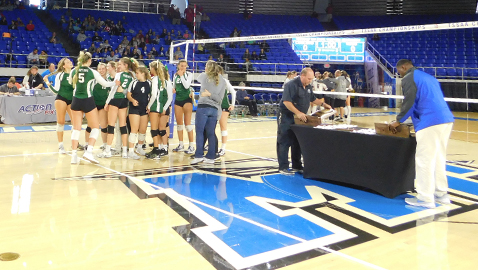 The Lady Spartans won their latest title with just one senior, outside hitter Kayleigh Hames. She was named Most Valuable Player of the championship match after posting 27 kills and 17 digs against the Lady Lions (36-12). Hames was pleased to see her team make a little history Thursday morning.

“As the only senior on this team, it was great to go out on top,” she said. “This is amazing. All the girls are awesome. We have an awesome coach.

“Just winning this last one, making history is a cherry on top. Being the only senior, it was great going out with a win.”

The coach is Chris Hames, Kayleigh’s mother, who completed her seventh season at Webb. She’s made seven trips to Murfreesboro and has brought six straight state championships back to East Tennessee.

Chris has had either Kayleigh or Nicklin, her other daughter or both on board for each title run, making things just a little more special.

“I’ve had the pleasure of coaching one of my kids in all six [championships] we’ve won,” Chris said. “That makes it a little more special.”

Nicklin is now at Nebraska and Kayleigh will head to Southern California and Pepperdine University next season.

“It will be different next year but we have some good young kids coming in,” Chris said. “It will be a bit of an adjustment but we have a good setter and two good juniors.”

But Webb will be intact and ready to make another state championship run next season.

While state title matches have become the norm for the Lady Spartans, the Lady Lions have made their share of state tournament appearances. Concord Christian has a young team as well and they’ll look to make a return trip to Murfreesboro next season.

“What we saw today was the nerves and the lights with the freshmen,” Concord coach Carmen Hochevar said. “We have a lot of freshmen and I have five of them on the floor at any given time but they started to jell.”

It took a while. The Lady Lions never got a lead in the first two sets. But CCS led 20-14 in the in its final set of the season.

“We’ve battled with them four times this season and I thought we were going to be able to take them in that third set,” Hochevar said. “We’re young and that’s what we’ve got going against us right now, but we’ll be back.”

Coach Hames also has no doubt that will be the case.

“I was glad we got them in three,” she said. “They’re a good team and I think that third set really showed that.”

Annabelle Sulish had 21 kills and Emma Meyer dished out 21 assists to spark the Lady Lions, who reached a state championship match for the first time. Concord has made four state tournament appearances, including two in Division I Class A.

Sulish said that the Lady Lions made great strides in 2018.

“I think we grew as a team and we really learned to play as a family,” she said. “We had a good year and I thought we did well, considering the number of freshmen we had playing on this big stage.”