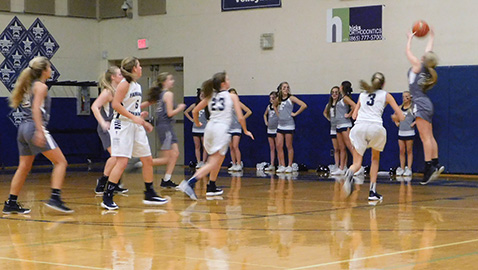 Josh Ballard says he relishes the chance to play rivalry games against Farragut.

“It’s always good to play games against quality teams like this,” said Ballard, West Valley Middle School’s girls basketball coach. “In these rivalry games, you just never know what you’re going to get.”

What Ballard and the Lady Wolves got early last week was a 32-27 Knox County Middle School Conference victory over the Lady Admirals on Monday, Nov. 25 at Farragut’s Bobby J. Henry Gymnasium.

But it certainly didn’t come easily. West Valley notched a key victory to improve to 8-0 in league play. But early, it didn’t look like the Lady Wolves were going to beat anybody as they fell behind 10-3 in the first quarter. That left Ballard looking for a spark.

And he got it from eighth-grade guard Sharon Wilson.

Wilson, a key player last season in a season that saw the Lady Wolves go 29-1 and narrowly miss the state tournament after sweeping the KCMSBC regular season and the James A. Ivey Jr. Memorial Middle School Basketball Tournament, went on a tear and scored 13 points over the final 18 minutes after being silent in the opening frame.

“Sharon is a great player and when we need a spark, she gives us a spark,” Ballard said.

While Sharon Wilson, Lindsay Wilson, Kendall Anne Murphy and Lainey Cox supplied some offense in the second frame, West Valley’s defense shut out the Lady Admirals (5-1) in the period and opened a 19-10 lead by halftime.

Farragut coach Devan McIntyre said she was pleased with her team’s start but also noted that much of the adversity that the Lady Admirals faced was self-inflicted.

“I was excited when we came out hitting (shots),” McIntyre said. “But I knew that they would make a run, and when they made their run, it was when we were making our own mistakes.

“It was the little things. It was missed box outs, unforced errors and turnovers.”

Ballard noted that he was impressed with the Lady Admirals and complimented them for their effort.

“I thought Farragut played a good game under their new coach and she has them headed in right direction,” Ballard said.

Over the past several seasons, the Lady Wolves and the Lady Admirals have been the two most consistent programs. West Valley and Farragut both made the East Tennessee Regional Tournament.

The Lady Wolves won the county tournament last season after Farragut won in 2017 and 2018.

But the Lady Admirals never quite recovered from their dismal second quarter last week.