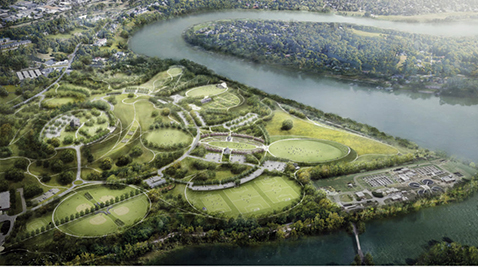 Knoxville’s largest and most popular park’s 2020 Master Plan was approved by the city council Tuesday with some requests and suggestions from nearby landowners.

Lakeshore Park, the former site of the East Tennessee Mental Health Hospital, was created when the state transferred 60 acres to the city. The park has grown to 125 acres and the former mental health administration building was totally remodeled and now houses the city’s Parks and Recreation Department.

The Lakeshore Park Conservancy manages the park which stretches along Northshore and Lyons View Pike and created the new master plan. Tom McAdams spoke for the non-profit Conservancy and recounted the park’s history and said that the conservancy held two public meetings and conducted a survey for ideas which resulted in more than 670 replies.

Dr. Gene Overholt and Scott Smith own property adjacent to Lakeshore and voiced some concern about relocating the ball fields there and replacing the fields with an event center and band shell. The concern is noise from events as well as light pollution outside the park.

Speakers on the matter noted that three neighborhood groups have also expressed concern with the event center and noise from there echoing across the river. Smith asked the council to “pause and reconsider” those who live nearby and noted the expected increase in traffic at the park.

Councilwoman Janet Testerman said she has concerns for the Northshore entrance to the park and Deputy Mayor David Brace said the city knows of that problem and is working with the state to create a plan.

McAdams said the master plan involves a four- to five-year “build out” depending on funds raised from contributions. New lighting in the park will feature the newest technology and be low impact. Relocating the ball fields should reduce the noise.

Asked about a large mound of dirt currently at the park  the council was told that a “sculptured  mound” is planned using the dirt unearthed during improvements to help hide views of the sewage plant and offer a sidewalk to the top for overlooks at the river.

The council and the nearby landowners praised the design plans for the park.

Joyce Feld of Scenic Knoxville spoke about the size of signs in Office Park zonings. She said the signs on the sides of buildings should be no larger than 5 percent of the square footage of the side of the structure. Councilman Andrew Roberto noted that hospital and health care centers are exempt and that most signs on buildings in that zoning cannot be illuminated inside the signs.

Councilman Tommy Smith moved to authorize pre-school and kindergarten special use permits in Parks and Open Spaces. Councilwoman Seema Singh seconded the motion, which brings Ijam’s Nature Park in compliance with city regulations. Councilwoman Amelia Park was the lone “No” vote against the change.

The council also voted to added funds to the citywide Curb Cut Project contract with Design and Construction Services Inc. to bring 136 street crossings into ADA compliance. Joel Simmons, a member of the mayor’s Disability Council, called the project “substantial” and helpful to the handicapped citizens with physical and visual disabilities.