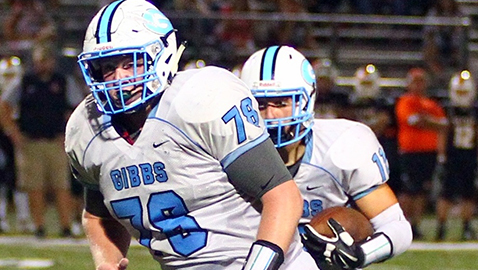 High school football signings are a festive occasion, filled with cheers and tears plus memories and expectations.

Ollie Lane’s signing with the University of Tennessee was that kind of day in December. Family and friends were there for the occasion in Gibbs’ gymnasium lobby. And at least one was there in spirit.

Memommie, Lane’s grandmother on his dad’s side of the family, was there and glad to talk about her grandson when this reporter asked if she could share some stories and information.

“Oliver is a wonderful kid,” began Memommie (pronounced Me-Mom-Me). “He always has been. He’s always loved UT and this was a dream come true for him.

“He has family scattered all over the United States and we’re all just very, very proud of him.”

Memommie also is known as Linda Lane when her grandchildren are not around.

“Ollie grew up in Clinton and Cookeville, wherever his dad’s job took him (Chris Lane is a manager for Lowe’s), but they ended up back in Knoxville 12 years ago and have been Gibbs community people ever since. He went to Ritta Elementary, Holston Middle and then he came to Gibbs High School.”

Memommie shared one funny story in particular about her grandson.

“Oliver always liked to eat,” she said. (That wasn’t exactly Earth shattering news as Lane has packed on some good weight since the end of football season and is up to 6-6, 310 pounds).

“My husband (Curtis Lane) and I used to take him to buffets. Ollie never had a quit on his stomach. He just wanted to keep going.

Big Daddy is what Ollie called his grandfather.

“He was a big football fellow from California and he played football at La Verne College, which is near Montclair,” said Linda, her eyes now noticeably moistening.

Names and nicknames indeed were prominent in conversations at the signing.

“My name is Oliver, but I like to go by Ollie, just a shorter nickname,” said Ollie.

“I call him Big O, but most of the time I call him Oliver,” said Memommie. “I don’t shorten their names.

“I like football,” she continued. “My husband absolutely adored football. I still don’t understand all the processes of it, but when I make a mistake, my son tells me, ‘Mom, that’s not right.’”

Linda has traveled to a lot of games. Oliver’s older brother, Hunter, plays at Austin Peay and will be a senior this coming fall.

“Wherever the car goes, I go with it,” she said. “Sometimes it rains, sometimes it’s freezing and sometimes it’s burning up, so you have to take your whole wardrobe with you.”

Tennessee opens the 2018 season Sept. 1 at Charlotte against West Virginia. It’s possible Ollie may get to see his high school teammate, Dalton Widner, on that trip. Widner, who signed with the Charlotte 49ers the same day Lane signed, will have a home game that Saturday against Fordham.

Oddly enough, Widner and the 49ers also will play the Vols in Knoxville on Nov. 3.

Memommie said Oliver also has grandparents (Barbara and Sid Reed) on his mother Barbara’s side of the family and a step-grandmother (Pat).

“They live in St. Louis and come as often as they can. They would love to be here today.”

The Reeds will definitely be close to Ollie when he and the Vols play at Missouri in 2019 and 2021.

Looking ahead, Memommie summed up, “He will be referred to as Ollie by many, but I’ll always shout for Big O. That’s after my husband, because they called him Big Daddy, so we call him Big O.”