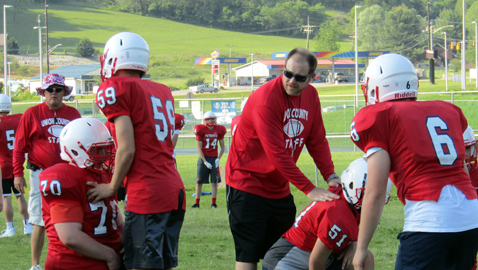 ‘A chance to do something special,’ says son Josh Kerr

Back surgery didn’t keep Coach Larry Kerr from being with his new football team at the start of spring practice.

Kerr used a John Deere Gator to make it easier for him to get around on the field at Union County High School and hollered instructions to the team often.

As the second day of the Patriots’ spring practice neared its end in Maynardville last Tuesday, the 68-year-old Kerr got out of the Gator and walked over to the team to make a few points up close.

Then he told his players to bring it in and take a knee.

“We’ve got to get committed,” emphasized Kerr, who came out of retirement to take over a program that reportedly owns the state’s longest active losing streak (26 games) and considered dropping out of the TSSAA’s playoff series last season. “Last year – so many kids were missing practice. How are you going to be a unit like that? I expect you to be here.

“I appreciate your work ethics,” added Kerr, his voice now more sincere than stern. “We’ve got a long way to go. But I see a lot of potential out here.”

Kerr hurt his back after increasing the tension level on the exercise bike he had been working out on. It’s been five weeks since his surgery.

“The doctor wasn’t going to release me,” he said.

Kitts said Coach Kerr “over reps everything” – in the weight room and running plays on the field.

“We’ll do nine sets of reps on the bench,” he added. “We may run a play six or seven times just to make sure we’ve got it right.

“So he over reps. That way everybody realizes they’re here to try to get us to win.

“Coach Kerr is intense,” continued Kitts. “Old school is what he is.

“We went hard in the off-season. There was not a day we didn’t go in the weight room. He came here in January and we haven’t stopped working out since. Everybody’s PRs are going up. Everybody is getting better.”

Those workouts have been held in a remodeled weight room with new weights. “We’ve already put $35,000 in here,” said Kerr, who always has been big on weight lifting in his coaching career.

A rubberized floor also has been installed in the locker room area and new lockers are being added. The Patriots also are getting new helmets and shoulder pads.

Kerr had been coaching for 35 years when he retired in 2009. His record of 268-112 makes him one of the all-time winningest coaches in the state.

The former Carson-Newman linebacker started coaching at Lake City High in 1974 and was an assistant the first three seasons. He became the Lakers’ head coach in 1977 and led the school to its only perfect season in 1979.

Kerr was head coach at Halls from 1981 through 1992 and last fall marked the 30-year anniversary of his Red Devils winning the Class AAA state championship. One of the top players on that team, Randy Banks, is now assisting Kerr at Union County and may end up being the team’s defensive coordinator.

Kerr left Halls and went to Anderson County in 1993 and coached the Mavericks for 16 years. His 1996 squad snapped visiting Cleveland’s famous 54-game win streak 31-7 on a frozen field in the state quarterfinals but bowed to Halls 21-7 in the semifinals the following week.

Kerr turned down Union County’s job offer at first. But after a couple of days, he told his wife, Janie, “There’s something that’s calling me. I think I can help those kids.

She said, ‘That’s what you need Larry. These last two or three years, you’ve been miserable. You don’t have anything to look forward to.’

“This job has energized me,” said Kerr.

The number of players at Union County have increased from in the 20s last season to over 40 now and the roster is still growing and expected to include 50 players this fall.

Josh Kerr, who was head coach at Clinton High for six years before resigning after last season, is now teaching at Union County and the offensive coordinator on his dad’s staff. And he’s happy.

“The biggest thing at the end of the day for me was family,” said Josh. “A chance to work with my dad and spend more time with my family at home. My wife just had our third child in March.

“Being a head coach, you’re never really off the clock, so it’s great to just coach and I couldn’t think of a better boss.

“My dad still has a lot of football in him and I couldn’t pass up the chance to work for him again. Life’s too short.

“Union County has been great to us. The school administration and community have been great. I think we have a chance to do something special here. The players are eager to work and have a great attitude. We talk about ‘foundation’ – building a strong house, and that’s what we are doing here. Developing a foundation for this program that will make it successful for the seasons to come.”

The Patriots are planning to finish their 10 days of spring practice with an intra-squad game Friday afternoon at 1:30.