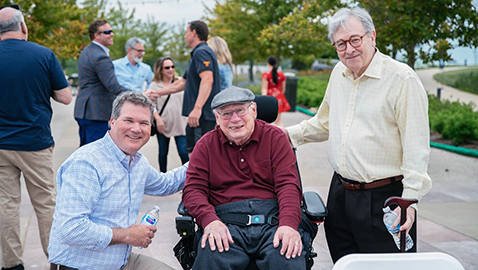 Larsen Jay, chairman of the Knox County Commission, kicked off his re-election campaign to serve once again as commissioner-at-large.  Knox County has two commission seats elected countywide, while the other members are elected by district.

Jay hosted festivities at Lakeshore Park and drew a big crowd for an old-fashioned lunch of barbecue and fried chicken and all the fixings, which came from Jackie’s Dream and Sweet P’s.  There were many notables and candidates circulating through the tables and crowds greeting old friends and making new ones while the band Wild Blue Yonder entertained the 250+ plus crowd.  Sheriff Tom Spangler was there, accompanied by Captain Mike Evans.  Mayor Glenn Jacobs introduced Larsen Jay in remarks which brought both laughter and applause.  Jacobs praised Jay for the commissioner’s willingness to work together.  State Senators Becky Duncan Massey and Richard Briggs were there, along with former Knoxville mayor Victor Ashe.  Devin Driscoll, candidate for the Knox County Commission, was enthusiastically shaking hands and so was Circuit Court Clerk Charlie Susano, who attended with his wife, Robin.  The Focus’s own historical columnist Ray Hill was seen posing for pictures with folks and retired Judge Charles Susano, father of Charlie Susano, was having a good time.  City Judge John Rosson moved through the crowd.  County Clerk Sherry Witt was holding court at a table while Garrett Holt, candidate for city council, was visiting with the several hundred people who came through the event.

Larsen Jay, surrounded by his wife, Adrian, and sons Henry and Alexander, thanked everyone for being there and joked a lot of folks wondered why he would want to run again in the current political atmosphere.  Jay said he loved and believed in Knox County.  Commissioner Jay has been especially strong in supporting law enforcement and has taken a strong stand backing the 287(g) program.