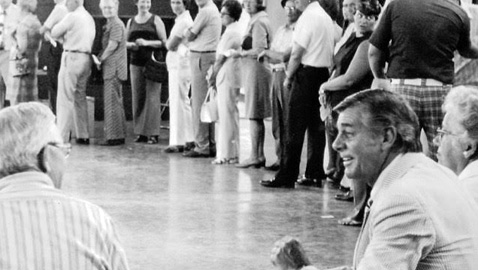 Ross Bass, for ten years a congressman from Tennessee’s Sixth District and U. S. senator for two years, was seeking to return to Congress in 1976. Bass had earlier announced he was done with politics after a disappointing defeat in 1974 for the Democratic gubernatorial nomination. Perhaps no politician in Tennessee’s history better represents a political career beset by changing voter trends than Ross Bass. Solidly Democratic in its voting habits with only a few exceptions from the turn of the century until 1966, there were indications Tennesseans were changing with the times. Dwight D. Eisenhower had carried Tennessee in the 1952 presidential contest and again in 1956 when Tennessee’s own Senator Estes Kefauver was on the ticket as the Democratic vice presidential nominee. Richard Nixon had carried the Volunteer State over John F. Kennedy in 1960. Still, Democrats had reason to be confident and while voters might prefer a Republican president, they continued to elect Democrats to most every other office on the ballot. Senator Estes Kefauver had won his final term in the Senate in 1960 while Tennesseans were voting for Richard Nixon over Kennedy. The GOP was not a factor when Frank Clement returned to the governor’s mansion in 1962, although Republicans won another congressional seat that year when Bill Brock defeated Wilkes Thrasher, Jr. to succeed Congressman James B. Frazier, Jr.

Bass had won the remaining two years of Estes Kefauver’s term in 1964 after Kefauver’s unexpected death in 1963. Congressman Bass had handily defeated Governor Frank Clement for the Democratic nomination and beaten Republican Howard Baker in the general election. When Bass sought reelection in 1966, it was a re-run of the 1964 election. Once again, Ross Bass faced Governor Frank Clement in the Democratic primary and the winner would square off with Howard Baker in the general election. Bass had won a majority of the vote in the 1964 while Clement won less than 36% of the vote. Ross Bass had cobbled together a coalition of organized labor, blacks, and working class people to win the senatorial nomination in 1964. Much to his surprise, Senator Ross Bass lost the 1966 rematch to Clement by a whisker; Bass trailed Governor Clement by less than 20,000 votes out of more than 750,000 ballots cast. To the end of his life, Ross Bass believed he lost the Democratic nomination due to large numbers of Republicans crossing over to vote for Clement because they believed Howard Baker would have an easier time defeating the governor in the general election. The numbers seem to support Bass’s contention, as Clement received fewer votes in the general election than he had in the primary.

Howard Baker’s election in 1966 was the beginning of a Republican resurgence in Tennessee. Winfield Dunn won the governorship in 1970, the first Republican to occupy the statehouse since Alf Taylor in 1920. Congressman Bill Brock defeated Senator Albert Gore that same year and by 1973, the GOP held the governorship, both seats in the United States Senate, and five of Tennessee’s nine seats in Congress. Thinking the tide may have turned after the Watergate scandal, Ross Bass had entered the 1974 gubernatorial primary, but lost to Ray Blanton. Bass’s political instincts had not completely failed him, as Blanton defeated GOP nominee Lamar Alexander and the Republicans lost two congressional seats.

Ross Bass had surprised most everyone when he had entered the 1976 Democratic primary in an attempt to recapture his old seat in the U. S. House of Representatives. Bass had calculated Jimmy Carter would run strongly in Tennessee and a congressional bid might get a boost from the candidacy of the peanut farmer from Georgia. Bass had also figured that his old Sixth District might be returning to its Democratic roots, noting that even with heavily Republican precincts from the suburbs of Shelby County inside the district, Ray Blanton had beaten Lamar Alexander by more than 20,000 votes. That was especially notable considering the returns from the ballot boxes in the Shelby County suburbs had voted for Alexander overwhelmingly, 22,944 to only 8,660 for Blanton.

Organized labor continued to support Ross Bass, especially against a pro-business Republican. Bass still faced opposition inside the Democratic primary from former Congressman Pat Sutton and Henry Ragan, an appliance dealer. Ragan was waging a full-time campaign for Congress, but raised little money and less attention even after visiting thirteen of the nineteen counties comprising the Sixth Congressional district. As the campaign approached the August state primaries, Ross Bass was raising little money for his own Congressional campaign. Bass received two $1,000 contributions, one from Tennessee Revenue Commissioner Jayne Ann Woods and another individual merely listed as a “federal employee.” Still, Ross Bass remained “the heavy favorite” for the Democratic nomination and once again received strong support from the Nashville Tennessean. The Tennessean never failed to remind its readers that Pat Sutton, “a once-colorful politician”, had served time in prison.

Bass continued to gamely campaign and charged Congressman Robin Beard manifested a “callous disregard” for the needs of the people of Tennessee’s Sixth Congressional district. The former senator said two recent votes in the House “have shown once again” Beard’s “support of the ultra-rich and big business private interests in the country.” Bass thundered, “First, he voted against the public works jobs bill which would have provided money for needed projects for cities and counties” inside the Sixth District. “Second, he voted for an $8 billion giveaway which shows his total involvement in support of the big business interests owned and operated by former members of the Nixon administration in Washington.” Bass claimed some of the executives of the companies benefitting from the bill were former Cabinet members of the Nixon administration.

Ross Bass was one of the Democrats endorsed by the Nashville Tennessean, along with Albert Gore, Jr., who was running for Congress in the Fourth District, and John Jay Hooker, who was seeking the Democratic nomination for the U. S. Senate against Jim Sasser. The Tennessean’s confidence in Bass was not misplaced, as he won the primary by a wide margin. Bass won 56% of the vote, with Henry Ragan his nearest competitor with almost 24% of the vote. Former congressman Pat Sutton was third with less than 15% of the vote. A fourth entrant, James Williams, who remained on the ballot after having withdrawn, drew slightly less than 6% of the ballots.

As the fall campaign began, some observers believed Ross Bass had a chance of making a comeback and revitalizing his congressional career. Most believed the success of Jim Sasser and Bass likely depended upon how well Jimmy Carter fared against President Gerald Ford. Both Sasser and Bass were delighted with the Carter candidacy and sensed the Georgian would run strongly in Tennessee. Buttons promoting the Democratic ticket – – – “Carter – Sasser – Bass” – – – began appearing throughout the Sixth Congressional district. Bass said he intended to run a “CBS” campaign, stressing Jimmy Carter, Jim Sasser and himself. Bass anticipated Carter campaigning in Tennessee and joked he would be quite willing to let the presidential candidate “have his picture taken with me.”

At the end of August, former Senator Ross Bass blasted Congressman Robin Beard for having what he termed a “slush fund.” Bass pointed out Beard earned $44,600 as a Member of Congress, as well as having access to $500,000 to pay his congressional staff and expenses. Beard admitted he operated a fund to serve constituents inside the Sixth District not covered by his House office. Bass held up a roll of paper towels labeled “Bundles for Beard” and urged Congress to disallow constituent service accounts. Beard gave a measured response, explaining the uses of the account and saying, “It looks like the campaign is under way.” Congressman Beard added, “I am not a wealthy man and the constituent services account has enabled me to better serve the people of my district.” Bass escalated the matter, demanding Beard resign from Congress; otherwise, the former senator would file charges with the appropriate House committee. Beard fired back Bass was running a “mudslinging” and “cheap shot kind of campaign.” Bass was disappointed when Congressman John Flynt of Georgia notified him Beard had not violated “any law, rule or regulation.” The issue never caught fire with voters, who seemed to believe Robin Beard had served them well.

Ross Bass was on hand when Jimmy Carter’s “Peanut One,” the Carter campaign plane, touched down in Nashville. Virtually every important Democrat in Tennessee was present to greet the presidential candidate. Jimmy Carter went on the attack, saying, “Republicans have brought disgrace upon our government. They have run the government in secrecy. This is a country that is waiting to restore morality, openness and purpose to our government.” Carter ended his talk with an endorsement of several Tennessee Democrats. “That is what I, Jim Sasser, Al Gore, Jr. and Ross Bass will do next January. Will you help us do that?” Carter cried.

Bass tried to paint Beard as anti-farmer when the Congressman voted to sustain President Gerald Ford’s veto of an Health, Education and Welfare bill passed by the Congress. Being the only member of the Tennessee Congressional delegation who voted to sustain Ford’s veto made Bass think the Congressman might be vulnerable on the issue. “When Beard voted to sustain the veto, he failed to properly represent the farmers of his district,” Bass charged. As Robin Beard represented an essentially Democratic district in Congress, Ross Bass attempted to revive the old Democratic coalition of voters to win the election. Labor, blacks, and working class people who had long supported Democratic candidates and causes were the focus of Bass’s efforts, but the candidate was soon to discover farmers were no longer the important voting bloc they had once been. Bass touted his experience, both as a congressman and U. S. senator and pointed out the next Congress would almost surely have heavy majorities of Democrats in both Houses. Bass contended he could get more done than Robin Beard. Bass hollered foul when Congressman Beard rejected an invitation for both candidates to appear at a luncheon sponsored by the Middle Tennessee chapter of Professional Journalists. Beard claimed to have a conflict in his schedule, while Bass bellowed the incumbent was afraid to face him in person. Beard had opted to attend Civil Service hearings at Fort Campbell, causing Ross Bass to sputter with outrage. Bass growled Beard’s attending the hearings constituted an “overtly political use of taxpayers’ money and government property.” Bass was even angrier when he learned Beard had designated a surrogate for a proposed political forum sponsored by the League of Women Voters in Williamson County. Bass noted he had never used surrogate speakers on his own behalf during his twelve-year Congressional career.

Bass continued to try hard to tie himself to Jimmy Carter, declaring President Ford’s grasp of foreign policy was “weak.” Bass did get the endorsement of the Nashville Tennessean in his race to reclaim his seat in Congress. Noting that if Jimmy Carter were elected President, he would receive little or no support from Congressman Robin Beard, the Tennessean urged voters to elect Ross Bass. Labeling Bass a “fighter” for the people with a proven record, the Tennessean felt the former senator was the right choice for voters in the Sixth Congressional district.

The voters had other ideas. Despite the fact Tennessee was Jimmy Carter’s second best state in the country after his native Georgia and that Jim Sasser pulled off an upset victory over Senator Bill Brock, the Democratic wave did little for Ross Bass. Congressman Robin Beard had managed to entrench himself inside his own district and the former senator won only barely over 35% of the vote in the general election.

It was a sad end to Ross Bass’s political career.