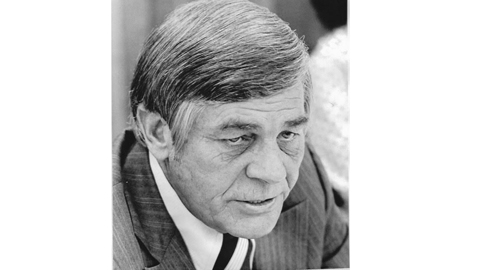 The 1974 Tennessee gubernatorial campaign took a heavy toll on the finances of several aspirants.  Dortch Oldham, who had run in the Republican primary, acknowledged spending perhaps $300,000 of his own money to fund his campaign.  Oldham said, “I don’t believe anybody would do that if he ever sat down before the campaign and thought about it.”  Nat Winston, who began the 1974 campaign as the favorite for the GOP nomination, had pledged about $100,000 in stocks he owned to pay some campaign bills.  Winston lost to Lamar Alexander and discovered he owed some $160,000 in campaign debt aside from what he had pledged.  “I felt a moral obligation to pay those bills,” Winston said.  “I negotiated the $160,000 down to $60,00 just by going to those people and saying ‘I’m trying, but there’s no way to raise the whole amount.’” Alexander admitted some Tennesseans thought he had spent enough of his own personal resources during the 1974 campaign to leave the impression he was broke, especially after it became public knowledge Ross Bass had bought a home from him.  As it turned out, Bass bought a home that Alexander had purchased as an investment.  Bass, who had served ten years in Congress and two in the United States Senate, had been defeated by Governor Frank Clement in the 1966 Democratic primary.  Bass had attempted a comeback in 1974, running in the Democratic primary for governor.  Since losing his Senate seat, Ross Bass had spent considerable time in Washington, D.C. as a lobbyist.  Following the 1974 gubernatorial campaign, Bass said he was no longer lobbying for the recording industry and described himself as “semi-retired.”  The former senator referred to the house he bought from Lamar Alexander, “I play some golf.  I’ve been working trying to get the house in shape.”  Still, Ross Bass, like virtually every other candidate for governor of Tennessee in 1974, had invested some of his own money in the race.  Yet Bass said, “I am still solvent and living well.  The campaign didn’t affect my life a great deal.  I knew the consequences of both victory and defeat.”  Bass acknowledged he ended the 1974 with a debt after investing what he estimated to be $100,000 of his own money into his campaign.

Ross Bass had moved from Pulaski after remarrying and bought a home in Nashville.  Bass said he had closed his consulting business in Washington and began selling real estate in the Nashville area.  Ross Bass told a Nashville Tennessean reporter he had ended his political activities.

Bass certainly kept up his ties with Nashville’s recording industry as he was on a flight with a pantheon of country musicians and actors playing in a golf tournament in the fall of 1975.  The former senator clearly did not intend to merely fade away, as he agreed to be on Teddy Bart’s radio show to talk about “the current political scene.”  Ross Bass was one of the few contenders for the 1974 Democratic gubernatorial nomination who had sat on the reviewing stand for the inauguration of Ray Blanton, the successful Democratic nominee along with former Senator Albert Gore.

There was a lot for former Senator Ross Bass to talk to Teddy Bart about, as 1976 was a presidential election year.  President Gerald Ford faced a stiff challenge from former California Governor Ronald Reagan in a contest that went all the way to the GOP National Convention.  Former Georgia Governor Jimmy Carter swept past his fellow contenders for the Democratic nomination and it soon became readily apparent the Georgian was popular in Tennessee.  Senator Bill Brock was up for reelection, along with every congressman in Tennessee.  1974 had been an abysmal year for Tennessee Republicans; Lamar Alexander had lost the gubernatorial election and two GOP congressmen, Dan Kuykendall and LaMar Baker, had bee defeated for reelection.  While Bill Brock started the election as the favorite, the Democratic nominee for the U. S. Senate, Jim Sasser, a former Chairman of the Tennessee Democratic Party, was folksy and shrewd.  Tennessee Democrats made an effort to recruit the strongest possible candidates down the ticket.  Evidently, Ross Bass was not entirely done with politics, as he sought to return to Congress by running against incumbent Republican Congressman Robin Beard.

Ross Bass was among the 100 or so persons attending the opening of Jimmy Carter’s Nashville campaign headquarters in early May of 1976.  As folks sipped soft drinks and nibbled on peanuts, Ross Bass and Jim Sasser circulated through the crowd.  “I’m here because I have a great interest in who will be the Democratic presidential nominee,” Bass told a Nashville Tennessean reporter.  “I believe we Democrats have a party of the people and the people have expressed their desire for Carter.”  Senator Bass believed Jimmy Carter to be “a man of great integrity” and thought the Georgian was “honest.”  “This country is crying for someone to lead us into the right area and I have confidence that Carter can do it,” Bass said.

A Democrat all his life, former Senator Ross Bass made an odd announcement following the Tennessee presidential primary.  Bass confessed he had voted in the GOP primary, although he did not say whether he had voted for Gerald Ford or Ronald Reagan.  The Tennessee primary had been a hard fought contest between the two, with Ford eking out the narrowest of victories over the former California governor.  “As a lifelong Democrat, I wanted to do this to demonstrate the urgent necessity for party registration,” Bass said.  “I also wanted to register a protest against the cross-over voting by Republicans which defeated me in the 1966 Senate race.”  Bass remained convinced to the end of his life that Republicans had crossover in the thousands to support Governor Frank Clement for the Democratic nomination in 1966, believing Clement would be easier for Howard Baker to beat than Bass.  Governor Ray Blanton had pushed the Tennessee legislature hard to enact party registration in Tennessee, an effort that failed.  To this day, Tennesseans may vote in the primary of their choice.

Following the presidential primary, a number of prospective candidates filed papers to run in the August party primaries, including former Senator Ross Bass and former Vanderbilt basketball coach Roy Skinner.  Bass filed to run against Congressman Robin Beard, who represented much of the area Bass had from 1955 – 1964.  Bass’s home of Pulaski was inside the Sixth Congressional district.  Skinner filed to run against Democratic Congressman Clifford Allen, who represented Nashville.  Ross Bass was not the only former congressman from the district to file to run again.  James “Pat” Sutton had defeated incumbent Wirt Courtney in 1948 in a race decided by less than sixty votes.  Sutton had been a war hero, who had been awarded the Distinguished Service Cross, the Silver Star, and a Purple Heart with an oak leaf cluster while serving in the U. S. Navy during World War II.  Sutton, highly ambitious, had wanted to run for the United States Senate in 1952 and only Senator K. D. McKellar’s determination to run for a seventh term kept the congressman out of the race.  Sutton got his chance to run for the Senate in 1954 when he ran a well-funded and bitter campaign against Estes Kefauver.  Senator Kefauver crushed Sutton’s senatorial bid, winning just over 68% of the vote, and the former congressman sought to return to Congress in 1956, when he challenged his successor, Ross Bass.  Bass beat Sutton badly, winning more than 69% of the vote inside the Democratic primary.

Pat Sutton remained highly popular in his native Lawrence County and had been elected to perhaps the most politically potent local office, becoming Sheriff for one term before being engulfed in a scandal that ended his political career.  Sutton had pleaded no contest to a charge of counterfeiting in 1964.  That would have been bad enough, but the former congressman went to prison in 1965 when a judge revoked Sutton’s probation in 1965.

Another entrant for the congressional nomination in the Sixth District, H. L. Townsend, quickly announced he was withdrawing as a candidate.  Townsend, a banker and businessman, cited his personal friendship with Ross Bass as a reason for ending his candidacy.  “I qualified because I didn’t think anyone else planned to qualify for the Democratic primary,” Townsend explained.  “It is my understanding that at least three or four others have qualified, including Ross Bass, a friend of mine.”  Townsend said he believed it was important for a strong candidate to emerge from the Democratic primary to run against Congressman Robin Beard.

Having qualified as a candidate for the Democratic nomination for Congress from Tennessee’s Sixth District, Ross Bass said he would make a formal announcement of his candidacy in a few weeks.  Yet another candidate for the nomination, James E. Williams, followed H. L. Townsend out of the race.  “In the interest of party unity, I will withdraw from the race in favor of Mr. Ross Bass,” Williams said.

As he had promised, Ross Bass made the formal announcement of his candidacy for Congress in a fiery declaration of why he wanted his old job back.  Bass charged Congressman Robin Beard represented “the ultra rich and big business” and was a “darling of the John Birch Society.”  “He doesn’t even represent the average Republican in the district,” Bass charged.  Bass noted Beard had been born in Knoxville, educated in Nashville and “elected in Memphis”, explaining Beard was an “interloper” in the Sixth Congressional district.  “My interpretation is that he is an interloper in the 6th District,” Bass said.  Bass was picking at an issue which could boomerang, as he owned a nice home in Nashville on Golf Club Lane, although the former senator insisted he now lived in Pulaski.  Bass retorted he had spent half a century of his life inside the Sixth District.  Should the issue of residency arise, Bass snapped, “I will have to win on that one” and added, “I understand the present congressman has never lived in the district at all.”

Ross Bass had his work cut out for him.  Robin Beard was an aggressive, dynamic and energetic congressman with broad appeal.  Photogenic in the age of television and much younger than Bass, Robin Beard had survived the 1974 election, winning more than 56% of the vote.  To first win election to Congress in 1972, Robin Beard had handily defeated incumbent congressman William Anderson, who had been the captain of the Nautilus submarine.  Anderson was running ahead the night of the election until the returns came in from the Memphis suburbs, which went heavily for Robin Beard.

Nor had the configurations of the Sixth Congressional district remained the same since Ross Bass had represented it.  The district had been comprised of twelve counties in 1964 and in 1972 it contained nineteen counties.  The Sixth District ran from the Kentucky state-line to the Alabama border and included suburbs in Nashville and Memphis.  The Nashville suburbs were trending Republican, while those suburbs inside Shelby County were heavily Republican.  Whatever strength Ross Bass had once had inside the Sixth District seemed to have diminished over time.  When Bass had sought the Democratic nomination for governor in 1974, he had won only 3,248 votes inside his former Congressional district.

According to Congressman Beard, “The issue is my past performance.  Is it acceptable or unacceptable?”

The stage was set for Ross Bass’s final campaign.