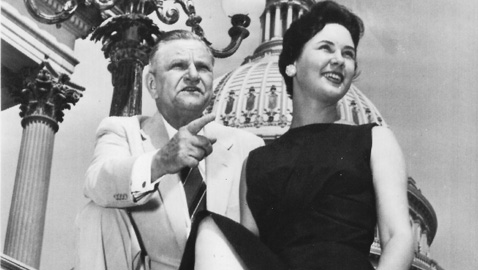 By Ray Hill
Edward H. Crump, long the political boss of Memphis and Shelby County, began to seriously fade in the summer of 1954. Increasingly weakened by heart disease, the Memphis Boss had been active in politics almost to the end. When former governor Prentice Cooper began sounding out a possible race against Senator Estes Kefauver in the spring, Crump had barked Cooper “couldn’t win.” Crump snapped a senatorial bid by Cooper would be nothing less than “a waste of time and money.” The Memphis Boss was not necessarily for Kefauver, whom he had strongly opposed in 1948, and suggested four potential candidates to run against the senator. Crump named Walter Chandler, a former congressman and mayor of Memphis, along with Congressman Jere Cooper of Dyersburg, John Heiskell, the attorney general for Shelby County, and retired brigadier general Everett Cook. None of the men mentioned by Crump was interested in running against Kefauver. Interestingly, Crump did not name Clifford Davis as a prospective candidate for the U. S. Senate race. Davis had been the congressman from Shelby County since 1939 and showed no sign of slowing down. Davis had replaced Walter Chandler when the Memphis Boss had summoned Chandler home to become mayor of Memphis. Crump’s failure to consider Davis was indicative of one of several things; the Memphis Boss did not believe Clifford Davis was of senatorial stature, Davis wished to remain in Congress, or Crump felt that Davis was ineffective. The latter is likely true as Crump was pondering removing Clifford Davis from Congress before he died.

The relationship between Crump and Clifford Davis had seen its ups and downs. Davis had been genuinely and personally popular in Memphis and Shelby County. Crump likely did not much appreciate the fact Davis had been the sole candidate supported by the local Ku Klux Klan to survive an effort by the machine to beat the KKK at the height of its power in the 1920s. Crump and his machine had fought a pitched battle with the Klan ticket for control of local politics. Crump managed to defeat the entire Klan ticket save for Clifford Davis who was elected city judge. Like Crump, Davis had been born in Mississippi. Davis attended the University of Memphis and earned a law degree and became the executive secretary of Memphis Mayor Rowlett Paine. Davis and Crump remained on opposite sides for a time while the Memphis Boss sought to consolidate his influence in Shelby County. Crump cobbled together a coalition of middle class Memphians, labor and African-Americans to create a formidable bloc of voters. Crump, despite being powerful, was not yet the kingpin of local government and sought to oust Mayor Paine in 1927. The Memphis Boss selected Watkins Overton to run against Rowlett Paine and Clifford Davis to run for vice mayor. The vice mayor also served as Commissioner of the fire and police departments; Davis was eager for a promotion and readily agreed to run on the Crump ticket against his former employer. Shrewdly, Crump had crafted a ticket with broad appeal to most Memphians, including candidates like Clifford Davis who had switched sides.

Rowlett Paine lost to Overton and the entire Crump ticket was elected and the Memphis Boss extended his control over both the city and county governments. Overton eventually tired of Crump’s domination of city hall and resigned in 1939. The city commission appointed Congressman Walter Chandler mayor and Crump backed Clifford Davis to take Chandler’s place in the U. S. House of Representatives. Davis had served quietly in Congress for fourteen years and while Crump’s life was ebbing, his political influence remained strong inside Shelby County. As the Memphis Boss considered replacing Clifford Davis in Congress, a dramatic event occurred, which saved Davis’ congressional career. Puerto Rican nationalists smuggled firearms into the gallery of the House and opened fire on congressmen in the chamber. Five congressmen were wounded, including Clifford Davis, who was shot in the leg. Congressman Alvin Bentley of Michigan was the most seriously wounded, shot in the left side, quite near his heart. Even after a successful operation, Bentley’s doctor gave the congressman only a “50 – 50” chance or survival, saying, “He is now in the hands of the Lord.”

An outpouring of sympathy and support descended upon the wounded congressmen, including Clifford Davis, causing Crump to decide against replacing him.

Crump died on October 16, 1954 and his political power went with him. Most of Crump’s contemporaries and allies were either dead or inactive. Senator Kenneth D. McKellar, Crump’s political partner for decades, had been confined to his hotel suite in Memphis following his defeat by Congressman Albert Gore in 1952. The Crump machine was leaderless following the Memphis Boss’s death and quickly disintegrated. By 1960, Clifford Davis had been in Congress twenty years and was virtually the last vestige of the old Crump machine.

Davis’s seniority brought him the chairmanship of the House Public Works Committee where he was able to help pass the self-financing bill for the Tennessee Valley Authority. That particular bill was highly important to the future of TVA and encountered stiff opposition from private power interests across the country. Congressman Davis organized a series of “informal dinner meetings” for fellow congressmen to promote the self-financing bill. Declaring he was campaign for “public education” of his colleagues, Davis hosted the first dinner at Washington’s old Congressional Hotel. Preferring to meet with smaller groups, Clifford Davis sought to feed and lobby groups of 20 – 25 congressmen at a time. Davis also sought out reporters, giving interviews promoting the TVA self-financing bill.

Despite his chairmanship of the House Public Works Committee, the aging congressman was apparently not making the kind of progress he might have liked and was reported to be increasingly “downright irritable” when the topic of the self-financing bill came up. Tennessean reporter Lois Laycock detailed a luncheon meeting of the Tennessee House delegation in the Capitol indicating the Memphis congressman’s short fuse. One of his colleagues wondered when Davis intended to bring the bill to the floor of the House, causing the congressman to snap, “I’m going to designate Joe Evins to take over management of the bill.”

Congressman Carlton Loser of Nashville evidently did not notice Davis’ irritation and pushed the matter, asking, “Well, when are you going to bring it up, Cliff?”

According to Laycock, Clifford Davis had been grousing about allowing someone else to manage the TVA bill for sometime. Evidently, Congressman Davis “resented suggestions that the bill be brought to a vote early in the session when some members of the delegation thought it would have a better chance of passing.” Davis was also troubled when Congressman Howard Baker, a Republican, reported he was having difficulty in securing votes from GOP members of Congress. Several months later, Davis was personally urging Republicans to back the bill with little seeming success. The fact no other member of the Tennessee House delegation accepted Davis’s offer to surrender management of the TVA bill likely indicated all recognized the obstacle of trying to pass the legislation without significant GOP support. Nor had Congressman Davis’ position been helped when the TVA Board of Directors approved a rate increase of 28% in Memphis and Shelby County. Quite naturally, that made folks unhappy back home and Cliff Davis heard about it from his angry constituents. Davis urged the Board to set aside the increase and may have deliberately slow walked the bill in an effort to put pressure on the Directors. The increase was viewed with dismay by many members of the Tennessee Congressional delegation. Senator Albert Gore wryly noted the timing of the increase “certainly will not help” in passing the self-financing bill. Yet another obstacle to passage of the legislation was the hostility of the Eisenhower administration to TVA. Congressman Robert E. Jones of Alabama wrote one Eisenhower advisor and bluntly urged a halt to “the Eisenhower-Adams (presidential assistant Sherman Adams) wrecking crew’s attempts to destroy TVA.” Eisenhower’s White House adamantly insisted on the House adopting a series of “restrictive amendments”, which would have the effect of limiting the ability of the TVA Board of Directors to administer the financing plan. Congressman Davis had little success in convincing Republicans on his own committee to support the plan and been told repeatedly they would not vote for the legislation without the amendments.

The original bill had not restricted action by the TVA Board of Directors, but passage by the House was considered slim, at best. The congressional supporters of TVA in the House were ready to accept a watered-down version of the bill, but with the opposition of the Eisenhower administration Clifford Davis was having a very difficult time indeed. The pressure on Congressman Clifford Davis only increased, compelling him to make a public promise to bring the TVA self-financing bill to a vote on the floor of the House of Representatives by February 1, 1959 or resign his seat in Congress. Davis’s self-imposed deadline came and went.

Clifford Davis was likely ailing and there were whispers of his fondness for alcohol. Davis had missed more votes than any other member of Tennessee’s House delegation during 1958; the congressman had missed 12 out of 30 recorded votes during the House session. Davis roused himself and went on the attack, charging private power interests were behind efforts to attach crippling amendments to the TVA bill. One such amendment regulated the area of TVA’s power service boundaries, causing Congressman Davis to bellow it was merely the “opening wedge” to destroy the self-financing bill.

“If they get the service limitation amendment through,” Davis said, then they’ll try for an amendment giving the secretary of the treasury control over the issuance of TVA bonds.” After making predictions on other possible amendments to the TVA bill, Congressman Davis said darkly, “The opponents of this bill will not be satisfied until they destroy it.” Davis leveled an accusation against Robert Merriam, an aide to President Eisenhower, of working with the private power special interests to attach amendments to the TVA bill. Davis pointed to literature distributed by the National Association of Electric Companies to Republican members of Congress and some Southern congressmen believed to be sympathetic to private power concerns.  That same literature strongly supported the concept of limiting TVA’s service areas. Robert Merriam had proposed just such a limitation in TVA’s service area, a point Congressman Clifford Davis thought not to be a coincidence. Davis had recently presided over hearings on the self-financing bill and noted the private power interests had allied themselves with the National Association of Manufacturers and the Chamber of Commerce. Davis had been both surprised and aghast when several Southern Democrats, who represented districts outside of TVA’s service area, supported the limitation amendments. Worse still, Congressman Carl Vinson of Georgia, chairman of the House Naval Affairs Committee, emerged as the leader of the limitation forces. The coalition of Southern Democrats and Republicans was formidable and Davis lamented, “I’ve never seen a more disciplined group.” Congressman Bob Jones told his constituents ‘some of the country’s most prominent champions of private enterprise and states’ rights” were lobbying hard to eliminate both with the TVA bill. Jones complained “…they want the TVA frozen, hamstrung and contained within its present territory and not to be allowed to expand a yard, much less a mile.”

Congressman Clifford Davis, the most visible remaining cog in the old Crump machine, had his hands full.