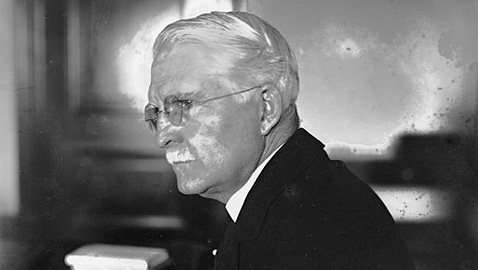 Lawrence Davis Tyson was Tennessee’s junior United States senator and while not a professional politician, the senator continued to demonstrate he had learned quite a lot in the short time he had served in the Senate. Possessing a gentlemanly nature, Tyson apparently also possessed a very good memory. Senator L. D. Tyson could be quite frank with other Tennessee politicians. Luke Lea, who was positioning himself as the boss of Tennessee politics during the decade of the 1920s, was in a powerful position due to his ownership of daily newspapers in the state. Lea was strongly for reelecting governor Austin Peay in 1926 and naturally looked to the popular Tyson for help inside the Democratic primary. While Luke Lea’s Nashville Tennessean had been bitterly against Senator John Knight Shields in 1924, it had not been especially pro-Tyson, a fact the senator remembered all too well. Nor had Peay done anything to help Tyson in his campaign against John K. Shields. When Peay solicited Tyson’s support in 1926, the senator remained neutral, telling the governor, “I believe that is the attitude which you assumed toward me when I was running for the nomination for the United States Senate.” Tyson did send Peay a terse and rather perfunctory telegram of congratulations upon his renomination in 1926.

In August of that year, Senator and Mrs. Tyson vacationed briefly at Tate Springs in Tennessee and despite owning a magnificent home in Knoxville, spent several days at the Farragut Hotel. From Knoxville, the Tysons went to spend a few weeks at the Battle Creek, Michigan health resort.

“In the midst of a great emergency a great people do not sit supinely down and let things take their course,” Senator Tyson told his listeners. “A great and forceful nation takes action. We have talked for 50 years and done but little for the farmers.” Tyson pointed to the fact wheat farmers benefitted from a tariff while cotton farmers did not. Tyson said he saw no chance of reducing the tariff.

Senator Tyson returned to Knoxville to speak to the convention of the Reserve Officers’ association at the Farragut Hotel. Tyson’s subject was the attitude of the Congress toward military preparedness. At the beginning of October, Tyson joined Senator McKellar in cooperating with the fall campaign of Governor Austin Peay. Originally, Tyson had said he could not attend a conference in Nashville of party elders to consult about the general election campaign. Evidently, Senator Tyson was able to rearrange his schedule as every Democratic member of the Tennessee Congressional delegation was attending. Tyson made the statement, “Governor Peay is the most popular Democrat in East Tennessee who ever sat in the governor’s chair.” Tyson scoffed at the notion some Democrats who had supported Hill McAlister in the very close gubernatorial primary might desert to support a Republican in the fall. Governor Peay reciprocated by appointing Senator Tyson to a special committee to meet in Memphis to discuss the price of cotton. “Some way, if possible, must be found to keep the price of cotton to the point of affording the farmers of the South a living wage,” Tyson said.

Senator Tyson had gone to Dyersburg, where he was scheduled to speak to a reunion of Confederate veterans. Tyson began a campaign swing for the Democratic ticket in October and traveled to Bristol where he extolled the administration of Governor Austin Peay. Tyson chided Republicans, saying if the GOP truly believed in progressive government, they would back the governor for reelection, especially as Peay had run a “non-partisan” administration.

Both senators McKellar and Tyson were on hand in Maryville for the annual convention of the Womens’ Christian Temperance Union. Senator Tyson hurried back to West Tennessee to speak in Union City on behalf of Austin Peay and the Democratic ticket. Tyson stopped in Nashville to rest for a day or two at the Andrew Jackson Hotel while campaigning for his fellow Democrats. Senator Tyson told a reporter he was confident the state ticket would win by a big majority. In recent days Tyson had given speeches in Union City, Blountville, Paris and Franklin. The senator said he was closing his campaign for the Democratic ticket in Sparta. Once back home in Knoxville, Senator Tyson predicted the success of the Democrats nationally would make it impossible for President Calvin Coolidge to be renominated in 1928. “I doubt now if he will permit his name to be considered as a candidate for President,” Tyson told a reporter. Tyson conceded if his predication was accurate, it made it more likely New York governor Alfred E. Smith would be the Democratic nominee. A Catholic and a “wet”, Smith would almost surely be a controversial nominee, especially in the South. Tyson complained that “…the East, including Pennsylvania is wet and all the rest of the country is dry.” Both predications proved to be accurate, as Calvin Coolidge announced he “did not choose” to run again and Al Smith won the presidential nomination of his own party. Senator Tyson’s hope the Democratic Party had been revitalized proved to be far less accurate. Herbert Hoover won in a landslide, with many usually Democratic states, including Tennessee, voting for the Republican instead of Smith.

Some prohibitionists grumbled when Tyson sold the Knoxville Sentinel in November of 1926 to Scripps-Howard. The Scripps-Howard chain favored modification of the Volstead Act, but one columnist wondered “are dollars wet or dry?”

Perennial candidate and persistent political gadfly Dr. John R. Neal popped up again two years after Lawrence D. Tyson’s election to the United States Senate to claim the General’s 1924 campaign spending was “excessive.” The Republican chairman of the committee on campaign expenditures “invited Mr. Neal to submit evidence.” Neal charged Tyson had spent the astonishing sum of $1.6 million in his bid for the U. S. Senate. Senator Tyson said loftily he was hardly paying attention to Neal’s accusations as there was “no foundation whatever for them.” The Clarksville Leaf-Chronicle huffed Neal was doing nothing more than trying to get into “the spotlight” and proclaimed “the wonder is that anybody pays any attention to him.” The Kingsport Times published an editorial insisting any senatorial investigation into Tyson’s campaign was “the height of absurdity.” “The implied charge is ridiculous upon its face,” the Times thundered.

Dr. Neal pressed K. D. McKellar to force an investigation into Tyson’s campaign spending, a plea the senator rejected. McKellar wrote Neal stating the perennial candidate needed to provide proof of his allegations. Senator McKellar also revealed the source of Neal’s dislike of L. D. Tyson. “And to be truthful, I have understood that your animosity toward Senator Tyson grows out of an unfortunate” editorial published by the Knoxville Sentinel when the newspaper had been owned by Tyson.

John R. Neal was, in truth, little more than a minor irritant, although his charges bore some hint of truth. L. D. Tyson likely did exceed the law then in place on campaign expenditures.

Senator Tyson largely ignored Neal and was more interested in the Senate debate on a treaty to ban the use of poisonous gas in the time of war. As a former general, L. D. Tyson spoke with more authority than most members of the U. S. Senate. Tyson said the support for the treaty came almost entirely from pacifists, a point of view the Tennessee senator did not much appreciate as practical. “My idea of war is to make it effective,” Tyson said on the Senate floor. “Every organization I know of connected with the World War is against ratification of the treaty.” Tyson said he had personally talked to “many, many men” who had fought in the First World War and “knew something about it and every one of them is against” the proposed treaty. Senator Tyson pointed to opposition from the American Legion. “At the last session of the American Legion, a resolution was passed against the ratification of this treaty,” Tyson said. “I believe it will be a very serious and grave mistake if we pass this treaty.”

Apparently readers of Tennessee newspapers always found the holiday plans of their elected representatives of interest. Most of Tennessee’s Congressional delegation went home to Tennessee for the Christmas holidays in 1926. Senator McKellar remained in Washington, while Senator and Mrs. Tyson divided their time between their daughter’s home in Virginia and visiting the senator’s mother in Raleigh, North Carolina.

Tyson returned to the Senate where he pressed for action on his bill to aid the retirement of emergency officers. Senator Tyson’s push drew the attention of Senator David A. Reed of Pennsylvania. Both men had fought in the World War; Tyson, of course served as general, while Reed had attained the rank of major. The two debated back and forth, with Tyson irritated enough to shake his finger at Senator Reed. Tyson finally got consent to have an hour of debate the following day reserved for his legislation. Tyson was less successful in stemming the tide of words the next day when his motion failed by seven votes in the Senate.

Congress adjourned on March 4, 1926 and Senator L. D. Tyson told John D. Erwin, the Washington correspondent for the Nashville Tennessean, he would remain in the nation’s Capitol for a few weeks before heading home to Knoxville. Senator McKellar was leaving for Tennessee, traveling by automobile so he could make numerous stops throughout the Volunteer State along the way home to Memphis. McKellar was up for reelection in 1928 and likely wanted to use the recess to bolster his own popularity in the state. Senator McKellar’s itinerary included stops in Bristol, Johnson City, Greeneville, Morristown and Knoxville. Lawrence D. Tyson would not face the voters again until 1930 and felt no pressure to travel the state. He would leave the operation of his Senate office in Washington to his administrative assistant, Major J. G. Sims.

Both McKellar and Tyson seemed popular enough and the Elizabethton Star published an editorial praising the work done by the former general in Congress. While the Star thought it “unfortunate” that Tyson was a Democrat, the newspaper noted he was indeed a “war hero” and steadily gaining influence in the United States Senate despite being just two years into his freshman term of office. The Star thought Senator Tyson exemplified a particular quality much prized by East Tennesseans: that of “gumption.”

Lawrence D. Tyson certainly did have gumption and he was enjoying his work in the U. S. Senate. There seemed to be little threat to his continued tenure in office, but few realized the ultimate threat looming over the General. Tyson had barely two years left to live.