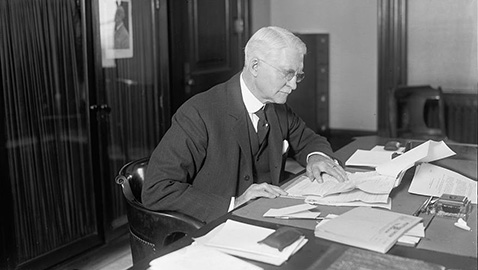 Lawrence Davis Tyson had been elected to the United States Senate to represent Tennessee in 1924. To get to the Senate, Tyson defeated a two-term incumbent and a respected former justice of the Tennessee Supreme Court. L. D. Tyson had won the general election easily and settled comfortably in the Senate. One of Knoxville’s leading citizens, Tyson and his wife Bettie were quite wealthy and lived in a sumptuous home near downtown Knoxville. Congress had adjourned March 4, 1926, but Senator Tyson remained in Washington, D. C. to tend to a few pressing matters. The senator was deeply interested in generating power from water and took a delegation of Tennesseans to visit Secretary of Commerce Herbert Hoover in his own automobile. The state legislature had created a special committee to explore the water-power question and Senator Tyson had been especially active in promoting its work and interests. The committee members were duly impressed with Tyson’s efforts on their behalf. They returned to Tennessee full of praise for the junior senator.

Both Tyson and Tennessee’s senior United States senator, Kenneth D. McKellar, were concerned about delays on the part of the federal government to issue the proper permits for dam sites on the upper Tennessee River. McKellar and Tyson were increasingly frustrated by the lack of action by the federal government on the Muscle Shoals project; Tennessee’s senators were keenly aware of just how much the project would benefit the people of their state. “The development of the water powers of Tennessee, which are entirely within her borders, should not be dependent upon Muscle Shoals or the water powers of any other state,” Tyson argued. “While the federal power commission may be justified in holding up the development of Cove Creek, it does not seem that it is justified in holding up all development in the valley of East Tennessee.”

Senator Tyson urged the Tennessee state legislature to adopt an official policy on water power, a recommendation that had been echoed by Secretary of Commerce Herbert Hoover and Secretary Merrill of the federal power commission. Tyson worried Tennessee’s ability to develop cheap electricity for consumers had been seriously delayed.

Senator Tyson did not leave Washington until April 9, perhaps reluctant to leave behind his wife, Bettie, who stayed at their Washington home after a brief illness. Once back home, Tyson promoted the purchase of land for the Great Smoky Mountains National Park, which the senator considered “the greatest opportunity for a profitable investment to Tennessee” by the federal and state governments. Noting the North Carolina legislature had appropriated $2 million for the purchase of land, Tyson encouraged the Tennessee legislature to make its own appropriation and quickly. Tyson said the project was not sectional in nature; quite the contrary, the senator insisted the park would benefit the entire state. “There is no more beautiful sight in America than Mt. LeConte and others which would be incorporated in the park,” Tyson insisted.

While Senator L. D. Tyson tended to his duties in Washington, Luke Lea, owner of the Nashville Tennessean, was dickering for a newspaper in Memphis and already had opened negotiations for purchasing a daily newspaper in Knoxville. The explanation as to why Colonel Lea wanted another daily newspaper in the East and West grand divisions of the state was, “Lea will run for the Senator against Tyson,” according to a report in the Knoxville News-Sentinel. The story in the News-Sentinel credited Lea with a grand political design; Luke Lea intended to displace Senator K. D. McKellar in 1928 with Governor Austin Peay, then topple L. D. Tyson in 1930. Governor Peay had been experiencing extraordinary difficulty in passing his program inside the legislature. The article published in the News-Sentinel said the easiest explanation “is to find out whether” a legislator was “for McKellar and Tyson or Peay and Lea.” The News-Sentinel did add a qualifier at the end of the article, attributing the information to “old time politicians who may or may not know what they are talking about.”

Upon his return to Knoxville, Senator Tyson opened an office on the third floor of the Callan Building on Gay Street and Church Avenue. Tyson proposed a special federal commission to be appointed by the president to study flooding conditions along the Mississippi River. Senator Tyson called on President Coolidge to act without delay in the hope the committee’s recommendations could be ready by the next session of Congress.

Bettie Tyson, the senator’s wife, was one of the more active Congressional spouses, at least in terms of the Capitol’s social life. The Tysons had the means to entertain on a large scale and they made the most of it. Mrs. Tyson hosted every woman from Tennessee attending the Daughters of the American Revolution in Washington in their home at 1601 R Street. Mrs. Tyson accompanied her husband when the senator went to Valley Forge, Pennsylvania to speak on the subject of the Volunteer State in a memorial address. Each state received the opportunity under the auspices of the Colonial Dames of America, with the exercises always held on a Sunday. Senator Tyson gave a recitation of Tennessee’s history and contributions to the war for America’s freedom from Great Britain. “It has been said the sea is the creator of history,” Tyson noted, “but the great visions of the world have come from the inlands.” Senator Tyson went on to praise the heroes from Tennessee during the Revolutionary War.

While Congress had adjourned, Senator L. D. Tyson made the most of the recess, being a highly popular speaker at memorials, and especially those occasions with a military theme and was frequently invited to make a speech by local chapters of the American Legion. Tyson traveled all over Tennessee and one of the biggest events was a Memorial Day address in Jackson, Tennessee. “The whole earth is strewn with the wreck and ruin of people, of nations and empires, whose downfalls were mostly due to inadequate preparedness or inadequate provisions for national defense,” Senator Tyson told a huge audience that covered the lawn of the Madison County Courthouse. “The peace and order of society, in any nation, finally rests upon the power of its armed forces.” For Tyson’s arrival, virtually everything in Madison County came to a stop; businesses shuttered their windows and locked their doors so everyone could hear the former general speak. Senator Tyson was in Kingsport, Tennessee on the Fourth of July, which also happened to be Tyson’s birthday. Tyson spoke at Dobyns-Bennett High School and did not disappoint his audience. The former general was perhaps the most popular speaker in the state of Tennessee, especially for patriotic occasions. A local reporter wrote the senator’s speech was not only stirring, but also “highly patriotic and forceful.” Tyson thought the Declaration of Independence was the greatest document ever written, save but for two: the Bible and the Constitution of the United States.

In August of 1927, Senator Tyson set sail for Paris, France to attend the Interparliamentary Union meeting, as well as a meeting of the American Legion. The Tysons remained in Europe for two months and their daughter, Isabella Gilpin sailed from New York to join her parents for the remainder of their time abroad. Senator Tyson made the keynote address for the American Legion meeting and it allowed the former general to visit with numerous men from Tennessee who had served under him during the World War. The full text of Senator Tyson’s speech was carried in newspapers across Tennessee. Tyson landed in New York on October 25, 1927 after his triumphant time in Europe and headed to Washington.

1929 had been a difficult year for L. D. Tyson. His eighty-nine year old mother had taken seriously ill and the senator made ready to hurry from Washington to Raleigh, North Carolina to be by her bedside. Mrs. M. L. Tyson passed away before her son could reach her.

The New Year dawned and it was the last full year of life for Lawrence D. Tyson. The Tysons continued to entertain in a series of dinner parties for friends and families. The senator continued to press for flood control and his bill to help disabled veterans. By the summer of 1929, Senator L. D. Tyson was seriously ailing. He quietly entered a hospital near Philadelphia accompanied by his wife. Tennessee newspapers reported Tyson was ill, but the nature of his illness was undisclosed and unknown. What was known was the senator was under the personal care of renowned neurologist Dr. George F. Phelps. Dr. Francis X. Dercum, who had treated Woodrow Wilson following the late president’s stroke, had been called in to treat Senator Tyson.

Whatever ailment was troubling Senator Tyson was obviously quite serious. John D. Erwin, the Nashville Tennessean’s Washington correspondent reported the senator was a “very sick man”, but Tyson was not believed to be in immediate danger, according to a letter received from Mrs. Tyson. Considering Dr. Phelps was a neurologist and Dr. Dercum was a specialist in strokes, it seems likely the sixty-eight year old Tyson may well have suffered a stroke. Tyson had been moved from the hospital to a private sanitarium run by Dr. Phelps. In her letter, Mrs. Tyson confessed she had been “somewhat uneasy recently about” the senator’s heart. The senator’s doctor insisted he “have a complete and absolute relaxation in bed.” Attended by two “wonderfully experienced nurses”, the senator was made comfortable and Mrs. Tyson claimed her husband’s “other organs are in such perfect condition” and in the “absence of high blood pressure”, she fully expected him to recover. Mrs. Tyson accepted the senator’s recovery would be a long process but she was “leaving no stone unturned” and had summoned a heart specialist “to look the general over.” Mrs. Tyson concluded her letter, writing, “Pray for him, all of you.”

Senator Tyson was forbidden visitors of any kind and was clearly not expected back in Washington when the Senate convened at the end of August. On August 6, the Tennessean reported Senator Tyson’s condition showed “some improvement.” By the end of the month whatever improvement there had been evaporated. The Tennessean disclosed Senator Tyson had suffered a “nervous breakdown”, which, at the time, could encompass any number of medical conditions. What was certain was Tyson was suffering from complete and utter exhaustion and troubled by a failing heart. The Knoxville News-Sentinel reported the senator’s condition had grown “worse” and Mrs. Tyson explained, “The doctors find that General Tyson’s exhaustion is even more profound than it first appeared.”

On August 23, Mrs. Tyson said she “feared the worst” as the senator’s heart was giving out. Senator Tyson was listed in critical condition. The next day, Lawrence Davis Tyson died.

As Senator Tyson’s condition worsened, it was his colleague K. D. McKellar who remained in constant communication with the family. Once Tyson had passed, McKellar made the necessary funeral arrangements with St. John’s Episcopal Church. McKellar issued a public statement praising his dead colleague. Senator McKellar said Tyson had been “a distinct success in everything he undertook” during his lifetime. The Clarksville Leaf-Chronicle published an editorial lauding Senator Tyson’s life. The Leaf-Chronicle believed Lawrence Tyson’s life was an example of “what a poor boy with courage, integrity and ability can do under adverse circumstances.” The Leaf-Chronicle summed up L. D. Tyson as “a man of big heart and clear brain.” Knoxville mayor James A. Fowler, although ill in Fort Sanders hospital, noted Tyson had “a most agreeable personality” and “was a man of pronounced ability.”

Senator Kenneth McKellar led a delegation of fellow senators to attend Tyson’s funeral. McKellar’s assessment of his late colleague was accurate; everything L. D. Tyson sought to do, he accomplished. Lawrence Davis Tyson was a success in his every field of endeavor, but the effort sapped his strength. Finally, Lawrence D. Tyson was laid to rest beside his beloved son in Old Gray Cemetery and he rests there still.