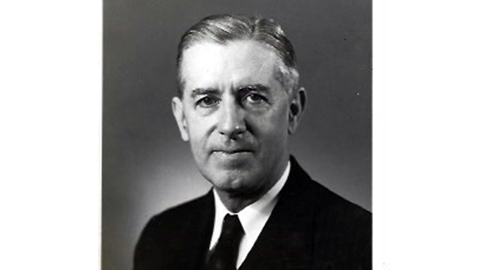 Prentice Cooper had served as governor of Tennessee for six years, the only man ever to be elected to three consecutive two-year terms in modern history. Cooper’s tenure covered the entire period when the United States was fighting a bloody war all across the globe.

Diminutive, less than five and a half feet tall, Prentice Cooper was neat and business-like in appearance. Coming from a wealthy family, the bachelor governor entertained in the executive mansion with his mother, Argentine, serving as his hostess. The former governor had never lacked political courage and oftentimes considered parsimonious, Prentice Cooper frequently parsed his words as economically as he ran Tennessee’s government. Despite Cooper’s business-like administration of state affairs, the Nashville Tennessean recalled the governor’s “belligerence in his personal contacts gave rise to almost constant turmoil.”

Cooper had been ineligible to run for another term as governor in 1944, although he was the favorite-son candidate of the Tennessee delegation at the Democratic National Convention for vice president. Prentice Cooper was not eager to reenter private life following his time in the governor’s mansion. Senator Kenneth D. McKellar had pressed President Harry Truman to find a suitable appointment for Cooper. The former governor was offered the ambassadorship to Australia, which he turned down, thinking it too far from Tennessee. McKellar, with his usual relentless pursuit of a goal, stayed after Truman and eventually Prentice Cooper accepted the ambassadorship to Peru. Cooper left the docks of New York City, along with his mother, Argie, on a steamship bound for Lima, Peru. Argie Cooper would serve as the mistress of the American embassy in Peru and the hostess for her son.

Cooper resigned as ambassador to Peru in 1948 and returned to Tennessee. In 1949, Cooper began a serious romance with Hortense Hayes Powell, who was working at the United Nations. Despite an age difference of some twenty-five years, the two fell in love and married in 1950. Prentice Cooper became a father for the first time on New Year’s Day in 1952 with the arrival of William Prentice Cooper at Vanderbilt Hospital. Cooper had attended the 1952 Democratic National Convention, where he volunteered to help Tennessee Senator Estes Kefauver’s bid to win the presidential nomination. Kefauver had briefly served as Commissioner of Finance in Cooper’s gubernatorial administration in 1939. The two remained friends, although they were allied with difference political factions inside Tennessee’s Democratic party. Cooper had been strongly supported by Senator Kenneth McKellar and his political partner, E. H. Crump, leader of the Shelby County machine, when he first defeated Governor Gordon Browning in 1938. At the time of his first election as governor, Cooper had been an obscure state senator from Shelbyville. Despite his ties to McKellar, the former governor did little or nothing to aid the old senator’s campaign for reelection in 1952. McKellar, aging and ailing, lost to Congressman Albert Gore that year. Cooper had taken little part in politics since retiring as governor, aside from reemerging to aid Kefauver’s presidential campaign.

Cooper was elected, along with two other former governors – – – Jim Nance McCord and Republican Ben W. Hooper – – – as a delegate to Tennessee’s Constitutional Convention in 1953. Prentice Cooper was promptly elected by his fellow delegates to preside over the Constitutional Convention. Despite Cooper’s lack of overt political activity, his ambition for higher office had not been extinguished by his retirement from the governor’s office. Reputedly, Cooper had been interested in running for the U. S. Senate in 1948 in place of Senator Tom Stewart, who had lost the support of E. H. Crump. Some political observers thought Cooper had something to do with the Memphis Boss’s refusal to back Stewart for another term, perhaps in the hope Crump would find the former governor to be a suitable replacement. Instead, Senator Stewart stubbornly insisted upon running for reelection and Prentice Cooper remained on the sidelines. Cooper’s lack of activity and support for McKellar’s reelection in 1952 may have been less political ingratitude than disappointment the veteran senator had not chosen to retire gracefully after thirty-six years in the United States Senate. Cooper might very well have leaped into the senatorial contest in 1952 had McKellar chosen to retire.

Prentice Cooper’s last campaign for public office began in 1958 when he announced he was running to reclaim the governor’s office. Campaigning for several months in a crowded field of aspirants for the Democratic gubernatorial nomination, Cooper astounded virtually everybody when he switched to the senatorial race at the last moment. Waiting almost to the filing deadline, Prentice Cooper challenged incumbent Albert Gore in a bitter primary. Cooper ran largely upon two issues: the continuation of segregation and “the Southern way of life” and Gore’s support for foreign aide, which the former governor denounced as “global giveaways.” Evidently Cooper’s senatorial campaign was lavishly financed as billboards all across the state heralded his candidacy and the former governor made extensive use of television advertising. It was believed by some Cooper’s campaign for the Senate was the most expensive race in Tennessee’s history. Certainly it was the first in the state’s history to employ a Madison Avenue-type campaign modus operandi.

Gore proved to be a hard target to hit, constantly invoking the name of the late Cordell Hull, Secretary of State under President Franklin D. Roosevelt, and a figure still revered in much of Tennessee. Gore won 59% of the vote in the primary, while Cooper took just under 40%. Prentice Cooper suffered the indignity of losing his home county of Bedford to Senator Gore.

The sixty-two year old former governor, father to three small sons, settled into the comfortable routine of practicing a little law, running the family’s business holdings, and living the life of a gentleman farmer. Assuming the role of senior statesman, Cooper was a familiar face at Democratic gatherings and seemed to take much satisfaction as a member of the special fraternity comprised entirely of former governors. Cooper socialized with former governors Jim Nance McCord and his one-time opponent Gordon Browning. Unlike Browning, Prentice Cooper rarely, if ever, issued endorsements of other candidates in Democratic primaries.

Cooper traveled to Fayetteville for “Governor’s Day” to join Browning, Jim Nance McCord and Frank Clement at the local fair in September of 1959. The former governors enjoyed a spread that included fried chicken, barbecue, ham, turnip greens, deviled eggs, as well as “a dozen kinds of cake” and “enough pies to stock a bakery.” Cooper was on hand in Pulaski, Tennessee when Speaker of the House Sam Rayburn visited Tennessee to make a speech.

In 1961, the former governor lost his father, William Prentice Cooper, who died July 3. The elder Cooper had served on the Board of Trustees for the University of Tennessee from 1915 – 1958, serving an astonishing forty-three years. The two had been close and had been law partners since Prentice Cooper’s retirement as governor. It had been W. P. Cooper who had built the stately red brick home in Shelbyville for his wife in 1904. Prentice Cooper and his family still lived in the home when his father passed away. It would remain Prentice Cooper’s home for the remainder of his life. W. P. Cooper had once been a speaker of the Tennessee House of Representatives and mayor of Shelbyville.

The former governor kept himself busy and traveled to Nashville to speak to students at Belmont College in May of 1962. Cooper had accepted membership on Belmont’s Development Program and made a talk at the college’s chapel. Cooper also joined a different committee with a much bigger agenda to reshape Tennessee politics. Prentice Cooper attended a meeting in Nashville to urge a fair reapportionment plan for Tennessee. The committee seeking to reapportion Tennessee’s legislative districts was comprised of “business, professional and educational men and women” all across the state in advance of the special session of the legislature called by Governor Buford Ellington. The addition of Prentice Cooper to the effort lent the group not only legitimacy, but also seriousness. Cooper broke his usual silence urging Tennessee legislators to stop playing “cheap politics” in avoiding reapportionment.

Both former governor Prentice Cooper and his wife Hortense were members of the Preservation of Tennessee Antiquities Association and both husband and wife retained an interest in things historical throughout their respective lives. Cooper was mildly active politically in 1962 as Frank Clement sought to return to the governor’s office. The former governor was spotted in his native Shelbyville wearing “a saucer-size” Clement button. A Nashville Tennessean photographer photographed Clement with his family during the campaign for the Democratic nomination. The three Cooper sons were all wearing ties and Mrs. Cooper was, as usual, dressed beautifully. The former governor was standing beside Clement shaking hands, but his gaze was averted to his boys and he was beaming.

Prentice Cooper attended a gigantic fundraising dinner for Tennessee’s Democratic party in October of 1962 held at the Nashville fairgrounds coliseum headlined by gubernatorial nominee Frank Clement. More than 3,300 Tennessee Democrats gathered together beneath a sixty-foot white and gold banner to hear speakers extol the virtues of Volunteer State democracy. Cooper sat at the head table along with virtually every other prominent Democrat in Tennessee.

Perhaps even more pleasant for the former governor was his visit to Nashville’s municipal auditorium when he took his three sons and Mrs. Cooper to attend the Ringling Brothers and Barnum and Bailey Circus in February of 1963. Snow on the ground did not deter the Coopers from making the trip. The following month found the ex-governor in Kingsport to speak to the Daughters of the American Revolution on the topic of “National Defense.” While in Kingsport, Cooper expressed dismay at Secretary of Defense Robert McNamara’s proposal to cut $14 million from the defense budget. The former governor expressed strong reservations, growling McNamara was gambling “with our survival” in his budget-cutting binge. “It is my belief that Russia will attack us as soon as she feels she has atomic superiority and when she has perfected the anti-missile,” Cooper opined.

Prentice Cooper was among the host of Tennessee Democrats welcoming President John F. Kennedy to Nashville in May of 1963. The former governor was accompanied by his wife, who was resplendent in black dress, a beige straw hat and a string of pearls. The four living former governors of Tennessee – – – Prentice Cooper, Gordon Browning, Jim Nance McCord and Buford Ellington – – – were all invited by Governor Frank Clement to come to the governor’s residence to meet with President Kennedy personally. When Kennedy was assassinated, grieving Tennesseans assembled for a special memorial service in Nashville, which Prentice Cooper attended, along with former governor Buford Ellington.

Cooper was again photographed by the Tennessean along with former governors Gordon Browning, Jim Nance McCord and Buford Ellington at a state dinner for Tennessee Democrats headlined by Franklin D. Roosevelt, Jr. Prentice Cooper was dapper in a dark suit, which evidently he continued to wear long after it was out of fashion during the decade of the 1960s. Known as an economy minded governor when he was in office, Prentice Cooper, in spite of being personally wealthy, remained thrifty.

Prentice Cooper offered one of his rare public comments when General Douglas MacArthur died on April 5, 1964. “It was certainly a great blow to America,” Cooper said. “I consider General MacArthur the smartest general who lived during my lifetime. I was the wartime governor and was acquainted with a number of generals and that seemed to be their opinion.”

The once peppery, blunt spoken governor seemed to have mellowed with age, marriage and fatherhood.