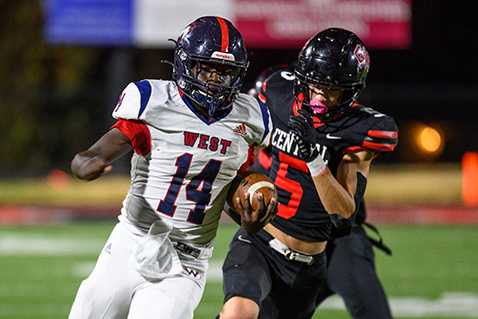 West High running back Brayden Latham wasn’t a workhorse through the regular season, but he was a thoroughbred.

With the Rebels mowing down the opposition in posting the school’s first-ever 10-0 record, there was no need to wear down the first-stringers or risk an injury in what could end up being a 15-game season.

So Latham’s rushing stats overall aren’t spectacular, except for one category. He averaged 9.1 yards per carry!

Still, No. 14 easily earned a spot on The Knoxville Focus / Coaches’ 2022 All-Knox County football team. His performance in Week 10 clinched it, too. That was the night Brayden scored all four of West’s touchdowns in a 31-18 victory over Maryville, ending the Blount County powerhouse’s 105-game win streak over Knox County teams.

It’s no surprise that unbeaten West has the most honorees on the 25-man first-team with six – two on offense and four on defense. Powell has a total of four.

Latham has good company as he and four others are TSSAA semifinalists for the Tennessee Titans’ Mr. Football awards. That includes two others in Class 5A – Karns running back De’Sean Bishop and Powell quarterback Jordyn Potts – plus Fulton quarterback Marcellus Jackson in Class 4A and Webb School quarterback Charlie Robinson, who is up for the prestigious award in Division II Class AA.

And Farragut’s Reese Keeney is a semifinalist for Kicker of the Year.

Robinson, who is committed to play football at the Naval Academy, made the All-Knox County first team as an “athlete.”

Keeney, of course, is the All-Knox County first-team place-kicker and part of its “special teams” unit. Reese had a perfect regular season as he converted 44 of 44 PAT kicks and was 3 for 3 in field goals. He also put 48 of his 61 kickoffs in the end zone for touchbacks.

Bishop wrapped up his outstanding prep career this fall with 2,320 yards on the ground and 28 touchdowns.

Potts, a member of Powell’s defending Class 5A state championship team, was injured in the season opener and was sidelined the first few games. As a result, last season’s All-Knox County first-team quarterback is on the second-team this year, as his absence played a part in the Falcons’ Jackson getting the first-team quarterback spot.

On the defensive side of the ball, first-team defensive end Steven Soles racked up 13 sacks, while Bearden defensive back Scott Tummins had a Knox County high seven interceptions, despite his coach, Josh Jones, saying, “he literally only plays 25 percent of our defensive snaps.”

The rest of Tummins’ time saw him leading the Bulldogs with 43 catches as a wide receiver.

A couple of second-team honorees also ranked No. 1 in stats as Fulton linebacker Kashawn Banks led the county with 131 tackles and defensive end Chase Stokely of CAK was tops with 28 TFL (tackles for loss).

Catholic’s Brock Taylor had the best punting average (42.9 yards) and second-teamer Tyson Siebe of West had the most successful PAT kicks with 68 going between the uprights and over the crossbar.

“Roger is a grinder every day,” said Courtney. “He loves the weight room and works hard on his fundamental technique on blocking. He also spends so much time year around on long snapping, I think he will be able to do that at a high level in college.”

Not only is Browning the holder for GCA, he’s an outstanding wide receiver and totaled 814 yards this season (the fourth most in the county).

Powell Coach Matt Lowe noted that junior Byron Finger (5-9, 280) is a “30-game starter at center and makes all pass protection and run game calls for the offensive line.”

Powell RB Connor Wheeler may have had the top season for a sophomore as he rushed for 1,384 yards and darted into paydirt 17 times.

Webb freshman Shavar Young ranked 12th in receiving (621 yards) and in a tie for fifth in touchdown catches (nine) during the Spartans’ nine-game regular season.

Both Wheeler and Young are second-team honorees.