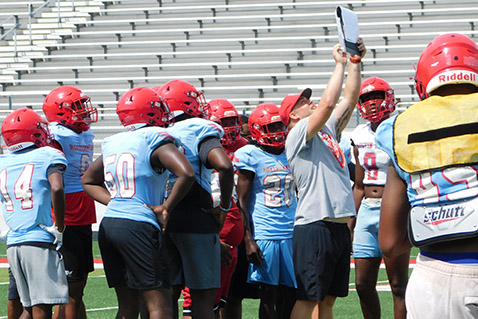 After a film session with coaches ended last Wednesday, Austin-East High School players were leaving the football facility when Head Coach Antonio Mays spotted senior captain Ja’brillion Lauderback coming down the steps with a bag of trash and emptying it in the trash bin.

Mays was impressed. Here was a captain, who leads the team in tackles for loss, taking out the trash. “That’s something you can raise your eyebrow about,” said the coach.

That’s just one thing about Ja’brillion, who is affectionately and respectfully called “Doughboy” by his teammates and coaches, a nickname borrowed from the popular Pillsbury character.

At 5-10 and 245 pounds, Lauderback is bigger this season. “I’ve been in the weight room and on the field gaining weight as much as I can and making it muscle,” he said.

Last year, Ja’brillion was listed 5-8, 220 on the preseason roster.

Lauderback, who led the Roadrunners with most defensive turnovers last season from his tackle position, has taken on more responsibility on the field this year, as Coach Mays needs him to play left guard on the offensive line, too.

“That’s something he wasn’t too happy about at the beginning – but he’s learned to love it, because he knows there’s a need for it for the team,” said the A-E coach.

While Lauderback will be an important player for Austin-East in 2022, Coach Mays says he will be counting on him even more for his leadership. And with Mays being a former defensive player himself plus a defensive coach, there’s a special relationship between the two.

Ja’brillion is hoping the Roadrunners will have a good year. It will start with a season opener at Fulton on Aug. 19 that should get both teams fired up.

“Yeah, rivalry game,” smiled Lauderback, who remembered being in the right place at the right time to pick off a tipped pass last season against the Falcons.

As far as his future after high school, Ja’brillion said he “would love to (play on the next level). That’s one of my goals in life.” He plans to study Engineering in college.

After Mays’ first team was winless in 2020, “the kids got the first two” last season with victories over Northview Academy and Union County. “As a coach, you want to make your standard higher than two wins, but you judge success in your progression,” he said.

“I felt like we had a good showing in the playoffs against Unicoi County. Down four points with three minutes left in the game, we muffed a punt. They scored and went on to beat us by 11. That was our sixth turnover of the game.

“I looked at that film a little bit and I thought we could build on some things for this year. And that’s kind of where we are right now.”

Mays ranks “experience” as the team’s strength. “We had a lot of kids who played when they weren’t ready,” he said.

Markeyis Billingsley will return at running back and has played since he was a freshman.

“We have a good quarterback battle going on right now with returning starter Leshaud Holloway (6-2, 180, sr.) and sophomore Jawan Troutman (6-4, 230).

“Leshaud has the experience and Troutman the physical attributes that you look for in a quarterback,” added Mays.

Dimere Ligon, a sophomore, is listed on the roster as a wide receiver, cornerback and running back.

Senior Camden Burse is a key returnee. On defense he plays the nickel position and offensively he’s a running back and receiver.

Austin-East’s schedule will include six road games and four home games this season due to the Scott game being moved to A-E last year. The away game at Pigeon Forge will be played on Thursday.