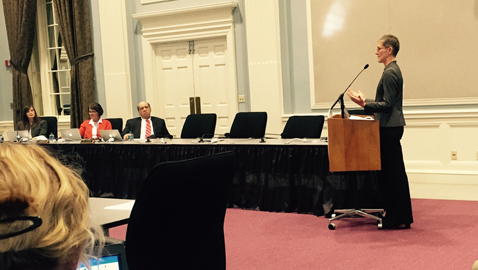 The Knox County School Board of Education’s End-of-Month Work Session was called to order by Chairwoman Patti Bounds on Monday, October 30, 2017. The first item on the agenda was a review and discussion of the Great Schools Partnership “Best Schools in the South” Campaign.

Vice President of Operations at the Great Schools Partnership Stephanie Welch addressed the board concerning the results of the “Best Schools in the South” campaign. Seven thousand surveys were taken from broad demographic groups across Knox County.  Welch stated, “We had enough responses to make assumptions about our data.”

Three important issues emerged from the surveys associated with the “Best Schools in the South” Campaign:

1) Quality of Teachers (far above the others)

Other factors that the surveys identified were the most important skills for students to master before graduation from high school. Responses were: reading, critical thinking, math, self discipline, writing skills and verbal skills.

The next steps in the “Best Schools in the South” campaign include better teacher preparation and more competitive compensation. At least some of this, board members thought, could be achieved through professional development. There were several comments among board members about high proficiency in reading and math and about how many stakeholders want to see all schools become community schools.

Board member Lynne Fugate inquired as to what Knox County Schools considers to be a “Best Teacher” and “What are Best Teacher practices?” She further asked if these practices were the same for 17 students as for 27 students.

Board member Terry Hill inquired about expanding the Great Schools Partnership to include more schools. Welch responded that schools need to submit an application.

Eighth District board member Mike McMillan asked about the percentage of survey participants from the four parts of town. He asked why only 9% of respondents were from South and East Knoxville and the rest from West and North.Welch answered that it was hard to get participants for online surveys from those areas of Knox County.

Board member Gloria Deathridge asked about what the “Best Schools in the South” Campaign learned about disparities. Welch replied that teachers across the district agreed that all students need the same opportunities for learning.

Kinley Koontz, the board’s student representative, asked if students were queried about their perceptions of Knox County Schools. Welch responded that 25 students were surveyed in a special focus group.

Acknowledging that discipline is a distraction to the learning environment, board member Tony Norman was curious as to how the community thinks the schools are doing in that regard. Welch responded that this issue can be polled.

Board member Susan Horn asked about college readiness. The professors from colleges such as Pellissippi State have noticed a lack of proficiency primarily in reading and English language skills. Business leaders urge that students be introduced to many paths to success, not just college.

The next topic was a “Discussion and Review of the Opiate Addiction Prevention Campaign” presented by Karen Pershing, executive director of the Knoxville-based nonprofit Metro Drug Coalition. Statistics show that Knox County School students are most involved with alcohol, marijuana, and tobacco even though overdose deaths from opiates are climbing. Pershing stated that in Knox County, it is the parents and the grandparents of the students that are dying from overdoses causing undue stress on surviving children that can affect learning.

The next agenda item was a “Discussion and Review of Positive Behavior Intervention and Supports (PBIS) and Restorative Practices Initiatives” which is also referred to as restorative discipline. This presentation was made by Steve Rudder, senior accountability analyst, and Melissa Massey, executive director of Student Support Services. Discipline referrals have decreased due to use of PBIS and Restorative Discipline this school year according to Massey and Rudder. Even though the Hispanic population is increasing in Knox County Schools, the number of suspensions is fewer this school year, especially in middle school (and particularly in in-school suspensions.) Deathridge interjected that she thinks that student behavior is just as bad as it used to be but principals are afraid to suspend students since they are being “watched.”

The final topic of the evening was the “Findings regarding Principal Preparation through the University of Tennessee Leadership Academy.” Clint Sattler, supervisor of Research and Evaluation, gave the presentation to the board. He started the discussion by asking, “Do we still have a need for such an Academy?”

Sattler considers the Leadership Academy to be the “Gold Standard” for principal preparation and that the Academy is in high district demand. Rountree interjected by saying that although student achievement data is up during the first year after an Academy principal takes over, there is no statistically significant increase after that. She followed up by asking if other factors, like length of service as a teacher or administrator prior to attending the Academy, were considered in determining principal quality. Sattler said these factors were not taken into consideration.

Board member Jennifer Owen inquired if having an advanced degree had any impact on success in the Leadership Academy. Mr. Sattler replied, “No, it did not.”

McMillan’s next question was about the existence of a contract between the Knox County Schools and The University of Tennessee for the Leadership Academy. Superintendent Bob Thomas’ answer was that one paper exists that was dated 2009-2010 and “that’s all we have right now.”

McMillan said that there should have been a contract back then but nothing was brought before the board in 2010. Superintendent Thomas urged someone to bring a $909,000 contract to the board for the Leadership Academy but he wants to investigate a cheaper way to accomplish the same thing.

Legal counsel for Knox County Schools, Gary Dupler, advised getting a contract for the Leadership Academy before the end of the current year.