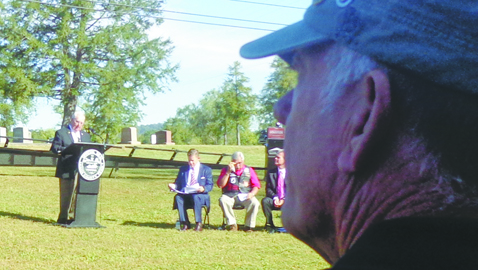 “The Wall That Heals” is a smaller version of the Vietnam Veterans Memorial in Washington, D.C., and was displayed in Knoxville starting Thursday. The wall was open 24 hours a day and lit at night until yesterday.

The 250-foot long wall has 58,318 names of men and women who died in the Vietnam War. It drew a huge crowd when it opened Thursday morning in Lynnhurst Cemetery, 2300 Adair Drive.

Major General John R. D’Araujo Jr. spoke at the opening of the Wall that Heals and recalled the Vietnam War years, the soldiers who returned alive and those who did not. He said the war years were a “period when this country was so divided.”

“In terms of grand strategy the United States lost the War in Vietnam. Our forces in the field were never defeated in battle. Those whose names are on this wall lost their lives but they did not lose the war,” he said.

“Many blame the media,” the general continued, “But the truth is it was our domestic politics, a misguided foreign policy, the loss of a political will and a losing strategy.”

“Perhaps this moving wall will serve as a re-enforcement of these lessons,” he concluded.

The general said that each time he visited the Vietnam Memorial Wall in Washington, D.C., he stopped by the statue of the three soldiers.

“Always I was overcome with mixed feelings of gratitude that my name was not among them and the feeling of guilt that those names were there and mine was not. There’s something haunting about the wall. When you stand in front if it you see your own reflection,” he said.

Fred Berry, who spoke briefly, said he was “amazed at the number of volunteers” the event is drawing and was “honored to be the host site.”

Knoxville Mayor Tim Burchett recalled his father’s Marine service and spoke of Vietnam veterans returning to an unwelcoming nation. He also said that about half the homeless in our area are veterans.

Knoxville Mayor Madeline Rogero told the crowd she has accompanied veterans on the flight to the wall in Washington and said, “You see every time what it means to them and their families.”

The ceremonies included the placement of wreaths at the wall by 31 different local organizations, patriotic music performed by the Central High School Band, and prayers led by Rev. Dr. Pat Polis and Most Reverend Richard F. Stika, Bishop of Knoxville. The colors were presented by the South-Doyle High School Cherokee Battalion Army JROTC Color Guard.

Other events over the weekend at the travelling wall included the Quilts of Valor on Friday and the presentation of the Missing Man Table and Soldier’s Cross on Saturday and Sunday. The speaker on Saturday was Captain Bill Robinson, the longest held enlisted Prisoner of War in U.S. Military History.