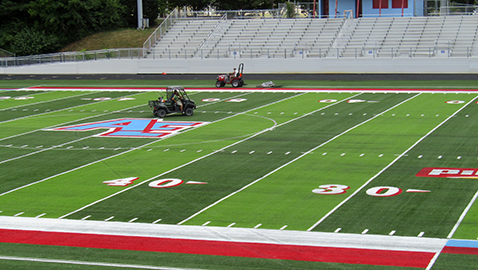 The defense is expected to play a bigger role for Austin-East’s football team in 2018.

“We’ve got a lot of guys coming back,” said Coach Jeff Phillips last week prior to a trip to Bradley Central for some 7-on-7 competition.

“A new quarterback will be starting. Our defense will have to be the focal point of our team this year. This is what we’re looking at right now.”

The Roadrunners have been blessed with talented quarterback play in recent seasons with Darius Harper and Chris Hunter.

“We’re looking for Trey (6-2, 210) to have a good year,” said Phillips, who is preparing for his sixth season as head coach. “Hopefully, he’ll also replicate some of those things that Darius and Chris did.

“He’s an all-around good runner, and more of an option run style quarterback.”

Defensively, the Roadrunners return eight starters, led by two-time All-State safety Isaiah Ligon, a versatile 5-10, 205-pound junior who also will be a key player on offense.

“He’ll be everything,” said Phillips.

Many of the Roadrunners will play both ways and also may end up playing different positions than they did last season, pointed out Coach Phillips.

Seniors Robert Allen (5-10, 175) and Chris Stevenson (6-1, 210) are returning linebackers. “They’ll be anchoring our defense and making everything work,” said Phillips.

Derrion Battle also returns in the secondary as a safety.

With Foster, Ligon and Stevenson, A-E has the ability to bring its fans to their feet when on offense, despite returning only five starters on that side of the line.

“Those guys are dynamic and they’ve got to step up and help us out at running back and quarterback to make the game easier for us,” said Phillips.

“Hopefully, Keon Smith can have a good year. He’s a sophomore receiver. But our outcome is on Ligon and Foster. Those are our two key guys.”

“They’re both physical and have the ability to move and make you miss,” said Phillips. “Both are working on being a complete back. It’s interesting. Both of them are sitting at about 200-plus pounds and can move.”

The A-E coach was asked if his team would have a balanced attack.

“Honestly, I don’t have any idea,” he replied. “There’s no way to tell right now. It just depends on what the game dictates.

“When you’ve got guys playing in new spots, nothing shows up until you get to Aug. 17 against Gibbs, then we’ll be able to figure out exactly what we can and can’t do.”

A-E opened with a 28-0 win at Gibbs last year. The Roadrunners will host the Eagles on their new turf field this season.