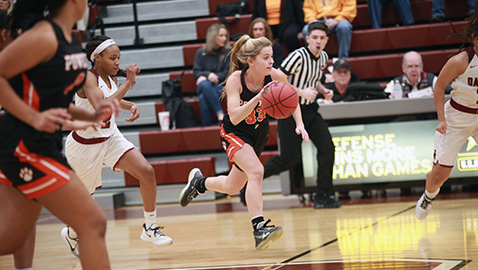 Powell got off to a great start in the District 3-AAA girls basketball championship game.

The Lady Panthers led by nine points over halfway through the opening period at Oak Ridge and Bailey Trumm’s third 3-point basket had them ahead by eight in the second quarter.

Then Khamari Mitchell-Steen took over on Jill Prudden Court Feb. 25.

The Lady Wildcats’ 5-8 junior guard scored eight straight points to cap a 10-0 run that put Oak Ridge ahead and on its way to a 64-53 win and the title.

“Khamari definitely ignited something for us offensively,” said Coach Paige Redman, whose team improved to 27-6. “She got us to another level offensively and when that gets going, our defense steps up and then it starts clicking.”

Mitchell-Steen, the tournament’s MVP, finished with 22 points and senior guard Bri Dunbar, a King University signee, totaled 21 and was eight for eight from the line.

“I just felt like it was a great team effort,” added Redman.

Semaj Clark came off the bench and had 11 rebounds. Raja Eckles chipped in eight points.

“It may have been a bad coaching move,” said Powell’s John Fisher, “but I said to my team (the day before), if No. 2 goes out and hits a bunch of threes, we’re going to have a hard time winning.

“That was the difference in the game and we didn’t shoot particularly well and they had a lot to do with that. Oak Ridge gets up and guards you. They always have. When we played over here (Jan. 28, a 57-54 Powell win), we shot it a little bit better and they didn’t shoot as good.”

The Trumm sisters (Bailey and Reagan), who are well known for their 3-point shooting, led Powell with 21 and 14 points, respectively. Bailey had five treys and Reagan three. Savanna Parker added nine points and Cassidy Hill seven.

Mitchell-Skeen’s last two shots in her scoring spree were 3-pointers, the first from the right wing and the second from the left corner that put Oak Ridge in front 19-17.

Bailey Trumm, who became the TSSAA girls’ career record holder for treys (410) during the regular season, stopped the flurry briefly with a 3-pointer at the left of the key, but it would be Powell’s last lead of the game.

Mitchell-Skeen fed Gracie Hearon for a basket inside, and after OR’s defense forced a turnover with a five-second closely guarded count, Khamari swished in her third 3-pointer. She followed that with a scoring drive that gave Oak Ridge a six-point advantage.

Dunbar scored nine of Oak Ridge’s 17 points in the third period as the Lady Wildcats stretched their lead to 14.

Powell tried to rally in the final period. Bailey Trumm made two free throws to cut the deficit to nine (53-44) with 4:15 left. The Lady Panthers stole the ball but gave it back on a traveling violation.

A steal by Parker followed by Reagan Trumm’s 3-pointer pulled Powell within eight (55-47) at 2:42, but they would get no closer.

SWEEP FOR RIDGERS: Oak Ridge held off Clinton 73-69 for the boys’ title. MVP Isaiah Johnson led the Wildcats (24-4) with 20 points. The Dragons (15-13) got a game-high 26 points from sophomore guard Jackson Garner.

In the tourney’s consolation games, the Central Bobcats defeated Karns 61-48 for third place and the Clinton Lady Dragons outscored Halls 81-77.