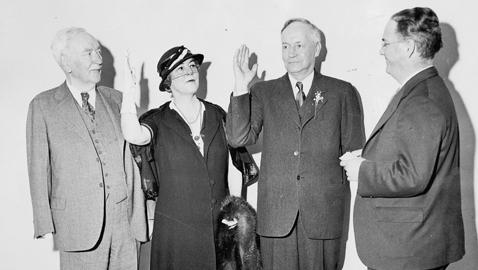 Originally from Louisiana where her father, J. M. Foster, was prominent in business and politics, Lucille McMillin moved to Tennessee after marrying her husband.  Unlike most of her contemporaries, Lucille Foster McMillin had the advantages of her father’s wealth and was highly educated, having been privately tutored before attending the Mary Baldwin Seminary for three years.  Afterward, Lucille Foster went to Paris where she studied languages.  Benton McMillin first met Lucille in Washington, D. C. and was immediately smitten.  The two were married and the couple had a daughter, Eleanor Foster McMillin.

Unlike most political wives at the time, Lucille Foster McMillin actively and publicly supported her husband after the expiration of his gubernatorial term.  Benton McMillin longed for a seat in the United States Senate and frequently was a candidate for the Senate.  Mrs. McMillin campaigned beside and for her husband when he was once again a candidate for governor in 1912.  Benton McMillin much preferred to serve in the United States Senate, but Tennessee Democrats implored the popular former governor to challenge the Republican incumbent, Ben W. Hooper.  Governor Hooper had first been elected due to a serious split in Tennessee’s Democratic Party and had been the beneficiary of a combine of Republicans and “Independent” Democrats, who were labeled fusionists by regular Democrats.  The fusionists represented a very real threat to regular Democrats and had won both seats in the U. S. Senate.  Luke Lea had been elected by the legislature in 1911 and John Knight Shields in 1913, giving the fusionists all three of Tennessee’s most important statewide offices.  Hooper was a formidable political force, having defeated perhaps the most popular officeholder in the state in 1910, Robert Love Taylor.  Taylor had been elected governor three times and had defeated Senator Edward Ward Carmack in a primary election to win a Senate seat.  Taylor, like Benton McMillin, had long had senatorial ambitions and was very reluctant to run yet again for governor.  The Democratic Party, fractured near to pieces following the administration of controversial governor Malcolm Rice Patterson, begged Taylor to run and he finally agreed.  Taylor’s defeat shocked just about everybody and the senator was brokenhearted by his rejection by the people of Tennessee.  Robert L. Taylor died shortly thereafter following complications from a routine surgery.

Like Robert Love Taylor, Benton McMillin was one of the few candidates available to challenge Governor Ben W. Hooper who would not exacerbate the hard feelings inside Tennessee’s Democratic Party.  The former governor was acceptable to every faction of the party and unlike Taylor, was eager to run.  McMillin campaigned all across the state, along with his wife.  Mrs. McMillin frequently made talks of her own, campaigning with her husband, as well as without.  Lucille Foster McMillin was especially popular with women’s groups, although women still did not then have the right to vote.  Mrs. McMillin was hardly less popular with the menfolk as they appreciated her poise, grace, and beauty.  Yet Mrs. McMillin’s prowess at campaigning could not stave off her husband’s defeat by Ben Hooper in 1912, despite a split in the national Republican Party.

Following the election of Woodrow Wilson as president, Benton McMillin was appointed Minister to Guatemala, where the couple lived for two years.  Governor McMillin was then appointed to serve as America’s ambassador to Peru and he and his wife remained in Lima for seven years before returning home to Tennessee.  Although seventy-seven years old at the time, Benton McMillin’s last political hurrah came in 1922 when he sought to return to the governorship.  Yet another Republican, Alf A. Taylor, brother of the late Robert L. Taylor, occupied the governor’s mansion.  McMillin faced Clarksville attorney Austin Peay in the Democratic primary and in spite of his advanced years, campaigned vigorously, once again accompanied by his wife Lucille.  Peay only narrowly won the Democratic nomination for the right to face Alf Taylor in the general election.  It was one of the few times that the Shelby County machine of E. H. Crump made a real difference in the outcome of the race.  Peay won a majority of 7,347 votes in Crump’s Shelby County and only won the nomination by 4,018 votes statewide.

Benton McMillin returned to his prosperous insurance business in Nashville while his wife became more active in political affairs.  Congressman Cordell Hull had been elected as Chairman of the Democratic National Committee in 1921 and prior to the 1924 campaign, Hull appointed Lucille Foster McMillin to serve as the director of a women’s organization for the Southern states.  Mrs. McMillin enjoyed the work and had been active in a number of other organizations including the James K. Polk Association, the Federation of Women’s Clubs, and the National League of Women Voters.  As her husband aged, Lucille Foster McMillin’s own personal prominence began to eclipse that of the former governor.  Benton McMillin’s last political post was serving as Tennessee’s Democratic National Committeeman.  In January of 1933, the eighty-seven year-old former governor was ailing with double pneumonia.  McMillin took to his bed and his life slowly ebbed away.  The old “Warhorse of Tennessee’s Democracy” died on January 8, 1933 after insisting, “I’m feeling fine” and slipping into a coma.

Both Benton and Lucille Foster McMillin had looked forward to Franklin D. Roosevelt taking the oath of office as President of the United States.  The former governor had met with Roosevelt’s political director, James A. Farley, when the latter was returning from visiting the president-elect in Warm Springs, Georgia.  McMillin and Farley had a conference in Chattanooga and there was speculation Roosevelt might appoint the former governor to another diplomatic post.  Roosevelt did issue a statement of sorrow upon Benton McMillin’s death, but it would be Lucille Foster McMillin that received an appointment from FDR.

Lucille McMillin gave Tennessee governor Hill McAlister a pair of large gold cufflinks her husband had worn for the last twenty years.  The cufflinks were engraved with the initial “M” and Mrs. McMillin explained, “I wanted to give him something I valued very highly myself as a token of Governor McMillin’s and my admiration for our faith in Hill McAlister.”

Mrs. McMillin added, “I told Governor McAlister that the mantle of Benton McMillin had fallen on his shoulders and that I could say nothing better than that.  I wanted him to have a small token from his friend.”

On May 2, 1933 President Franklin Roosevelt announced his intention to appoint Lucille Foster McMillin as a member of the U. S. Civil Service Commission.  Cordell Hull, Roosevelt’s Secretary of State and Benton McMillin’s successor in Congress, as well as Tennessee’s powerful senior United States senator, Kenneth McKellar, had touted Mrs. McMillin for the post.  While some newspapers at the time thought Mrs. McMillin was appointed to the Civil Service Commission “as a tribute to her late husband”, the truth was the governor’s widow had long been active in politics in her own right.  Cordell Hull knew Lucille Foster McMillin as well as anyone and admired her greatly.  Senator McKellar was also a profound admirer of Lucille Foster McMillin and having been a strong supporter of giving women the right to vote, realized the political importance Mrs. McMillin’s appointment would have for women in Tennessee.  Mrs. McMillin succeeded Miss Jessie Dell as a member of the Civil Service Commission.

Mrs. McMillin’s nomination was rapidly approved by the appropriate Senate committee, on which Senator McKellar served.  Never bashful about promoting anyone or anything from Tennessee, Senator McKellar quickly had Mrs. McMillin’s nomination reported favorably to the full Senate.  By May 12, 1933, Lucille Foster McMillin had left Nashville for Washington, D. C.  She moved into the Carlton Hotel, which was also the residence of Cordell and Frances Hull in the nation’s Capital.  Mrs. McMillin was to take the oath of office as a member of the Civil Service Commission the following day.

Lucille Foster McMillin enjoyed her work and was active in Washington, D. C. social life.  Mrs. McMillin was the guest of honor and principal speaker at the annual banquet for the Columbian Women of George Washington University in May of 1934.  Mrs. McMillin gave the baccalaureate address at Lincoln memorial University the following year and made the observation “the biggest job that the Christian citizen has on his hands today is to do his utmost to avert another world war.”  The University of Tennessee awarded a special degree to Mrs. McMillin following her speech on “The Ideal Citizen.”

Lucille Foster McMillin was oftentimes included on the guest list when Franklin and Eleanor Roosevelt entertained official Washington.  The Nashville Tennessean’s social correspondent found Mrs. McMillin in the garden of the White House, which had been festooned with Japanese lanterns for the occasion.  Georgia Knox Hudson duly recorded Mrs. McMillin was “stunningly gowned in dazzling white.”  Ms. Hudson was also on hand when Lucille McMillin spoke at a Valentine’s Day dinner in Washington, D.C.  Noting the speaker wore “a dinner gown of brown organza sprinkled with gold stars,” Ms. Hudson barely remembered to recall Lucille McMillin spoke “on the value of cordial relations with the press.”

Lucille Foster McMillin was back home in Tennessee to give a speech on “The Progress of Women in Government” in the spring of 1938.  Mrs. McMillin also spoke to a gathering of the Tennessee Federation of Women’s Clubs, where she stressed her support as a member of the Civil Service Commission for merit appointments.  “By doing your best to protect and extend the principles of selection on merit you are doing a vital service to yourselves, your state and your nation,” Mrs. McMillin told her audience.

It was Lucille McMillin who made the opening address at Washington’s Wardman Park Hotel when delegates gathered from the United States and Canada for the Civil Service Assembly in the fall of 1938.  According to Georgia Knox Hudson, Lucille Foster McMillin spoke with “beautifully clear enunciation combined with a beguiling Southern voice.”  Mrs. McMillin’s personal popularity in Washington, D. C. had much to do with her personal charm and wit and was renowned as an excellent storyteller, but she was also taken seriously as a member of the Civil Service Commission.

Mrs. McMillin was reappointed to the Civil Service Commission by President Roosevelt and continued to serve until her health began to fail her.  America’s entry into the Second World War had caused Washington, D. C. and every agency associated with the government to explode with growth.  Like most everyone else, Lucille Foster McMillin worked hard during the war and it was July of 1945 before she could leave for a vacation of more than a week.  Mrs. McMillin opted for a visit to Canada and certainly she likely looked forward to the cooler temperatures in Quebec as compared to the heat and humidity of Washington, D. C.  On September 14, 1946 Lucille Foster McMillin announced she was resigning as a member of the Civil Service Commission.  She was to be replaced by another well-known woman, Frances Perkins, Secretary of Labor throughout the administration of Franklin Roosevelt.

Mrs. McMillin remained in Washington as her health continued to fail.  Sadly, Lucille McMillin had outlived her only child before she died February 25, 1949.