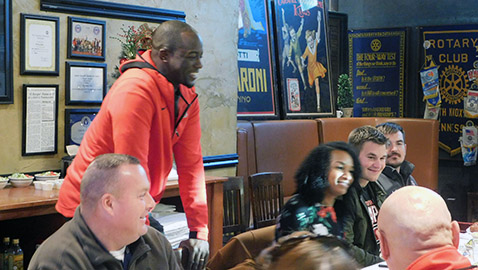 After Central High School recently won the Class 5A State Championship, the players and coaches got a heroes’ welcome upon returning to Knoxville.

Area businesses, football boosters and high school football fans haven’t been shy in passing out congratulatory greetings, well wishes and celebrations at every turn, justifiably so.

State titles are difficult to win and the Bobcats started 0-2 before winning 13 consecutive games en route to hoisting the Gold Ball on an early Sunday evening in Cookeville.

There was little talk of football although some coaches shared some stories from the historical football season at Central.

“We spend all of our time [as coaches] having each other’s back on Friday nights and this is just another way to say ‘thank you’ to our coaches and our families. We’re treating our coaches and families today.”

Central has played for a state football championship three times in the past two decades. The late Joel Helton guided the Bobcats to a title game in 1999, where they lost to Memphis East.

Rosser and the Bobcats played Memphis East and fell in 2016.

They won it all recently when they outlasted Henry County 14-9.

Rosser said that this state championship belongs to all who played for and are (and were) associated with Central High.

“I’ll be talking about this forever,” he said. “This is everybody’s championship.”