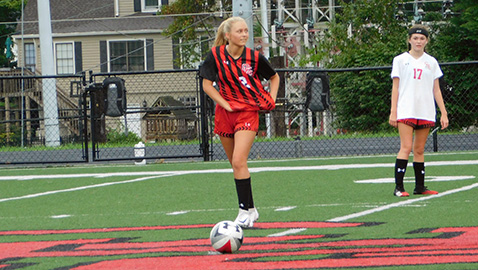 After much speculation and waiting due to the coronavirus pandemic, the 2020 high school girls soccer season is finally here and all of the area’s top teams will begin playing games this week.

Just what the new season will look like remains a mystery, but many squads have lofty expectations for the upcoming campaign.

Bearden will strive to keep its perfect District 2-AAA record intact. The Lady Bulldogs have not lost a district match since joining the league in 2016. But they’ll face some stiff competition from Morristown West, Morristown East, Jefferson County and West High this season.

Bearden went 17-4-1 in 2019 and the Lady Bulldogs have a bevy of savvy veterans back including sophomore forward Brinley Murphy, senior forward Zneyah McLaughlin, senior forward Janie Lewis and others who will lead them in a season that still has plenty of uncertainty.

“I’ll believe it when I see it,” Lady Bulldogs’ coach Ryan Radcliffe said. “I’ll believe that we’re getting to play when we’re actually on the field and playing and the team that handles the adversity and the (COVID-19) situation will be the last team standing.

Bearden will open its season Tuesday at home against District 3-AAA and Region 2-AAA runner-up Powell.

The Lady Panthers will look to challenge Oak Ridge and Karns in that district.

In District 4-AA, the Central Lady Bobcats won the district and Region 2-AA titles last season en route to making their first-ever appearance at the state tournament. Central will have to replace Ashton Blair in goal since she’s graduated and moved on to East Tennessee State University.

But the Lady Bobcats have some talented players back in Adryanna Brown, Lyric Fowler, Abbey Kennard, Dani Macres and Lochlyn Treadway.

In District 4-AAA, defending district tournament champion Hardin Valley Academy is in a rebuilding mode after losing 10 seniors from last year’s squad. Key veterans include Claire Palya, a junior midfielder and defender, who was an all-state performer last season; Abigail Davis, a sophomore and all-region defender and Nora Jacomen, a sophomore who can play both at forward and in the midfield.

Lady Hawks’ head coach Jessie Stephens, who is in her third season, knows her squad will experience some growing pains out of the gate.

“We definitely experienced some success last year, but we will struggle and have some growing pains early,” she said. “But we have a group of girls that is ready to work hard and I think they’re ready to play some games against some other teams.

Also in District 4-AAA: Farragut has a new coach in Kristen Lyons. She replaces Drew Payne, who resigned after the 2019 campaign after three seasons.

The Lady Admirals have struggled recently but Lyons has wasted little time making her impact on the once proud program.

“We’re going to be hard to beat this year and we’re not going to be the same team that we were last season,” Lyons said. “These girls have come in here ready to work and not one girl has complained. They’ve done everything that I’ve ask of them.

“The thing that’s special about this team is that the older players don’t let the others get behind.”

In Division II-A: Christian Academy of Knoxville has some talented veterans back including senior goalkeeper Hannah Nichols and junior midfielder Lia Schreuder.

Meanwhile, Grace Christian Academy won the district title and Sonny Trotter’s Webb School of Knoxville side looks to return to prominence in 2020.

In District II-AA: Catholic has a new coach in Mason McNally. The Lady Irish reached the state championship game in 2019.