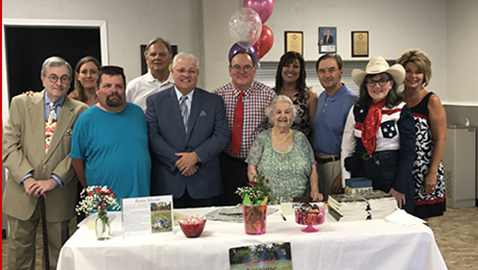 Rosie Moore, Pete Gawda and Ralphine Major all signed their latest books, all published in 2018, at a reception.

Moore promoted her third and latest release, “Love Anytime,” at last week’s event. Gawda, a veteran reporter, promoted “Reflections of a Small Town Reporter” and Major appeared to promote “Piddle Diddle, the Widdle Penguin, and the Texas Longhorns,” the third and latest installment in a children’s book series that chronicles the adventures of the titular penguin and her brother, Petey.

Moore’s book is a love story that unfolds over several years. She said that, while the book isn’t biographical, it is based on some life events.

“I just write from my heart,” said Moore, who has also published “Daisy Mae” and “The Girls.” “It’s a love story about a young woman and it starts when she’s age 12 and it follows her through the years and shows what she goes through.”

Moore is the longest-tenured columnist at The Knoxville Focus.

Gawda’s work chronicles his career as a reporter and photographer at The Okeechobee News.

He said that he was encouraged to write a book but waited until he retired from the small Central Florida newspaper.

“People told me that I should write a book and I waited until I retired and came to Knoxville,” Gawda said.

“The book kind of took on a life of its own. I didn’t know that covering city and county politics could be so funny.”

Major was promoting her latest release in Piddle Diddle the Widdle Penguin children’s book series. She co-wrote the book with her brother, Wayne, who created the book’s main character. The books are illustrated by Teresa Wilkerson.

“Piddle Diddle, the Widdle Penguin, and the Texas Longhorns” follows the penguin and her family on vacation at a Texas dude ranch.