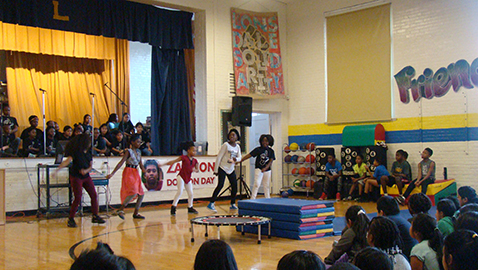 Lonsdale Elementary School honored one of its own Wednesday afternoon as it celebrated the life and legacy of Zaevion Dobson at the second annual Zae Day.

Dobson, a 15-year-old Fulton High School football player, was killed on Dec. 17, 2015 when he valiantly shielded two friends from random gunfire. He was posthumously awarded the Arthur Ashe ESPY Award for courage by ESPN.

Zae Day is celebrated by the school and Lonsdale Community on Jan. 24. The date is no coincidence. Dobson’s uniform number with the Falcons was 24 and it has been retired by Fulton High School as Lonsdale and North Knoxville now regard themselves as being 24 Strong.

“We celebrate this day and honor Zaevion and we will do it now and forever,” said Lonsdale Elementary School Principal Wendy Hansard. “We do this on this day because his football number at Fulton was 24.”

The theme of Zae Day 2018 was courage and three students shared their stories of courage in essays.

Hansard also presented Zenobia Dobson with a check for $1,137 for the Zaevion Dobson Fund. Those funds were raised by Lonsdale Elementary School’s student body.

Lowe was the first speaker to address the theme of courage.

“Courage doesn’t mean that you’re not afraid,” Lowe said. “It means that you don’t let fear stop you.”

On Dec. 1, Lowe was told that she had two brain tumors.

“I was overwhelmed and I was scared as I underwent many tests,” Lowe said. “There wasn’t one day that I didn’t have someone with me from my Lonsdale family. They were my courage.

Zenobia Dobson said that she missed her son greatly but noted that he did the right thing. She also asked that those in attendance observe a moment of silence for the victims of a recent school shooting in Marshall County, Kentucky.

“I’m here to stand up against gun violence,” she said. Zae showed courage when he was confronted with a life and death decision.

“He did the right thing. I love him and miss him. But I know that he has another assignment now with the Lord.”

Furlow Jr. had his own story of courage as he strived for a career in football while attempting to overcome a knee injury. When football wasn’t in the cards, he said that it took courage to find a career.

“Courage is not created equal,” he said. “I’ve heard Zae’s story and today, I’ve learned as I’ve heard others and their stories of courage.

“I’m truthfully humbled to be here and I wish that everybody had the chance to see what courage looks like. For me, courage was watching my mother raise kids in public housing, and moving every other year to keep her kids away from drugs. Courage was watching her leave a job that she had for 15 years and get married so her children could have a better life than she had.”