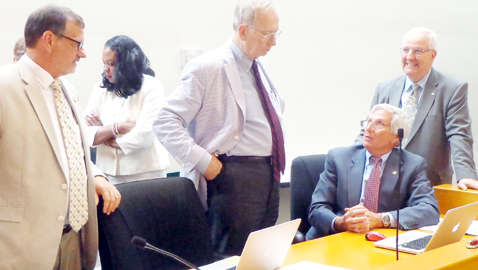 The Emerald Youth Center’s hopes to build a $9 million facility in Lonsdale came one step closer to a reality recently when the Knox County Commission agreed to give the city a portion of the Sam E. Hill School Property.

The commission voted unanimously to pass a “no recommendation” of the gift, located at 1725 Delaware Avenue, on to today’s regular meeting with some stipulations. The donated empty lot from the Board of Education, coupled with the city’s promise of $ 1 million, means plans for the community center can move ahead.

“Thank you for all you do,” Commissioner Brad Anders told Steve Diggs, who briefly addressed the commission’s work session. Knoxville Public Works Director David Brace said, “This is a community with real needs for youth” in speaking of Lonsdale.

“Our initiative is to bring about transformation of youth andit’s unlike any project I’ve been involved with,” Diggs told the commissioners.

Chairman Dave Wright said the resolution allows the law department to back out of the agreement until the contract is signed and explained that the property would not be transferred until both the city and county mayor sign it.

The transfer of land has a 15 year life for use and, if the project isn’t completed or changes hands, the city will pay the county a percent of the land’s fair market value.

If the land is never used for the Emerald Youth project the land ownership will revert back to the county.

The commissioners also discussed approving paintball and airsoft facilities in Agricultural Zones as a use-on-review condition with some question about the amendment applying to all such zones. The law department and planning commission were asked for some clarification.

In a discussion of Tourism and Sports suggested by Commissioner Randy Smith, the commissioners heard from Sports Commission Director Chat Culver who talked about attracting more groups to the county.

Anders called Culver and his office “a hard working team in promoting Knoxville.”

Commissioner Hugh Nystrom noted the success in attracting seasonal sports events and asked about the “shoulder seasons” between major events. Culver said he’s going “to those conventions, promoters and government bodies” to attract visitors and events.

“We get them to town and Knoxville sells itself,” Culver said, adding that the area needs more multipurpose fields similar to the Rocky Top facility in Sevier County.

Commissioner Bob Thomas said that Knox County is “positioned in the perfect location” for sports visitors and suggested a study on the issue.

The commission set September 18th for its re-organization which would include election of a chair and vice chair and appointment of commissioners to committees.

Commissioner John Schoonmaker asked for a study by MPC of the OB zoning which permits office and medical operation but also currently includes residential.

The commission also discussed the discretionary fund and Commissioner Charles Busler reported on how other counties use their funds. Anders suggested that the fund remain as unchanged.

The board of education’s repayment of $11,962 to Knox County was also discussed, over the next 10 years. The funding goes back several years and was used for energy management equipment which the county approved without issuing bonds to cover the project.

Commissioner Carson Dailey asked if energy was actually saved and the school system’s Executive Director of Finance, Gary Spencer, said he is going to review the plan.

The commissioners also gave a nod to a lease with Samuel J. Furrow of the Cherry Street Alternative to Prison Program. The lease runs for two years with a monthly rent of $4,245.

All of the work session items discussed will be back before the commissioners when they meet in the City-County Building today at 5 p.m.