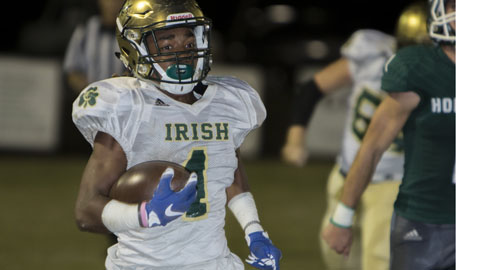 There are two weeks of the regular season remaining on the local high school football scene, but already some regional champs have been crowned.

Gibbs had an open date Friday night but earned the Region 2-5A title anyway by virtue of Heritage’s 17-10 win over West.

The Eagles, who are 4-0 in region play, return to action this week with a non-region assignment at Carter. They will play their final region game at West on Oct. 28.

Catholic wrapped up the Region 2-4A crown with its 55-14 win at Carter.

Some region championships and No. 1 seeds for the playoffs won’t be settled until the final week of play.

Hardin Valley Academy knocked off previously undefeated Bradley Central 14-13 Friday to move into second place in Region 1-6A. The Hawks have a chance to win the region if they can sweep William Blount and unbeaten Maryville on the road in their final two games.

Oak Ridge can wrap up the Region 3-5A championship when it plays at Campbell County in a TV game on Oct. 27. A win by the Cougars, however, could force a three-way tie, including Farragut in the mix.

A Week 11 showdown already is set for the Region 2-3A title when Alcoa plays at Christian Academy of Knoxville on Oct. 28.

Austin-East and Grace Christian Academy still have some work to do, but if they pass region tests this week, they’ll collide for the Region 2-2A championship on Oct. 28 at GCA.

FIRST THINGS: Maryville plays at Bradley Central in this week’s Thursday Rivalry Game on MyVLT. The Bears can make up for their loss at Hardin Valley by upsetting Maryville.

Friday night headliners include Gibbs at Carter, West at Fulton, South-Doyle at Farragut, Oak Ridge at Webb, Tellico Plains at Grace Christian and Austin-East at Sweetwater.

The Top 25 also included No. 5 Maryville and No. 9 Bradley Central, but Hardin Valley’s win over Bradley Central in Week 9 should boost the Hawks from their No. 23 rating.

PREPS OF THE PAST: Twenty-five years ago, on Oct.9, 1981, Clinton senior tailback John Miller had a 97-yard touchdown run in the first quarter to get the Dragons rolling to a 31-7 win at Central. Miller, who totaled 207 yards on the ground, cashed in his second TD a little over a minute later after a fumble recovery by Greg Sweet.

Robert Dixon contributed a 30-yard field goal and four PAT and Todd Holbrook ran for a pair of touchdowns after intermission.