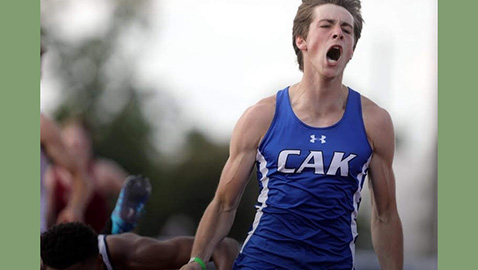 Gabel Fulford had the type of performance at the Spring Fling last year that most high school athletes only get to dream about.

The Christian Academy of Knoxville sprinter and hurdler came home with three Division II Class A state championships, including the decathlon, two second places and one third place.

Coming into this outdoor track season as a senior, Fulford naturally had more big goals for the return to Murfreesboro.

It didn’t happen due to the coronavirus pandemic.

“I was proud of all that I accomplished last year,” he said last week when Spring Fling 2020 would have been held. “At the same time, I would have liked to finish first in all of my events as I’m sure anyone in my position would have wanted to do. Finishing second twice really bothered me.”

“Coming into this year I was in great shape from constant training and my mentality was that I was going to be the best person that stepped onto the starting line every single race,” he said. “My goals were to not lose a single race all season and to eventually win four more state titles in the 110 hurdles, the 100, the 300 hurdles and the 200.

“My plan was to focus on sprints and hurdles this year, as that was what I was recruited for.” He wouldn’t be competing again in the decathlon.

Fulford opened the outdoor track season by competing in the East Tennessee Jamboree on March 7 at Farragut High. He won the 110 hurdles in 14.98 (a faster time than his state title time in 2019) and placed sixth in the 100 in 11.49.

After the spring sports season was put on hold in mid-March, Fulford remained positive.

“I kept my hopes up until the end on April 15,” he said. “When the news came that the season was canceled I was pretty upset but thankful that I still have four years of college to make up for this lost season.”

Gabel never stopped training. “I am still constantly training. I also play a lot of pick-up basketball with my friends.”

Fulford was asked if there was anything positive he could take away from this season.

“My biggest takeaway was to never take any of this for granted,” he replied. “Never get lazy with your training because you don’t know when your last race will be.”

Fulford has a lot to look forward to and will be attending Samford University in Birmingham. It’s a private Christian school and the 87th oldest institution of higher learning in the nation. He will run track and study business marketing.

“I am very excited to continue competing,” he says.

“I will be doing the 400 hurdles, the 110 hurdles and all sprints and relays. Decathlon is always a possibility if my coaches need me to do it.”