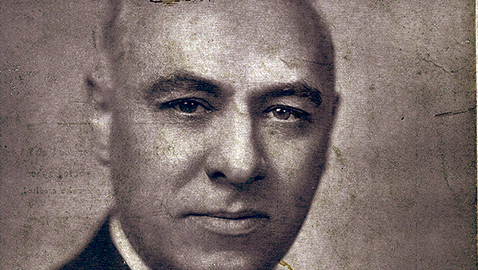 There were several Congressional districts across the country largely populated by immigrants.  There were districts in New York City with a heavy Italian population, while similar districts in Illinois and Michigan were inhabited by Polish citizens.  Across the Midwest there were states where German-Americans were an important constituency.  Most of the Congressional districts heavily populated by immigrants and the children of immigrants belonged to labor unions. They were an integral part of the local work force and were extraordinarily patriotic.  Indeed, it was Congressman Louis C. Rabaut who was responsible for inserting the phrase “under God” in the Pledge of Allegiance.  Rabaut was also the sponsor of the “Pray for Peace” postage cancellation, which, I believe, is still used today.

An eloquent speaker, when the debate about adding the language “under God” to the Pledge of Allegiance was being held on the floor of the House, Congressman Louis Rabaut told his colleagues, “You may argue from dawn to dusk about differing political, economic and social systems, but the fundamental issue which the unbridgeable gap between America and Communist Russia is a belief in Almighty God.  From the root of atheism stems the evil weed of communism and its branches of materialism and political dictatorship.  Unless we are willing to affirm our belief in the existence of God and his creator-creature relation to man, we drop man himself to the significance of a grain of sand and open the floodgates to tyranny and oppression.”

With the onset of the Great Depression, many citizens who were the product of immigration or the children of immigrants were hit especially hard by the faltering economy.  Like millions of other Americans, they were drawn to the candidacy and Democratic Party of Franklin Delano Roosevelt.

Louis Charles Rabaut was himself the son of immigrants, who had come to the United States from Flanders.  Rabaut ran for Congress the first time in 1932, facing Carl Weideman in the Democratic primary along with at least five other candidates.  Weideman and Rabaut fought for the nomination inside a district in Michigan’s Wayne County, running from the east side of Detroit toward Hamtramck.  Weideman won a comfortable, albeit a distinct plurality of the vote with just over a third of the vote inside the Democratic primary.  Rabaut ran a somewhat distant second, polling slightly more than 23% of the vote.  Weideman went on to win the general election against incumbent Congressman Robert H. Clancy, an enterprising politician who had first been elected to the U. S. House of Representatives in 1922 as a Democrat.  Clancy lost his reelection bid in 1924 to Republican John B. Sosnowski.  Evidently not one to give up easily, Clancy switched parties in 1926 and managed to defeat Congressman Sosnowski in the 1926 GOP primary.  In the 1926, 1928, and 1930 elections, Robert H. Clancy faced the same opponents in the primary and general elections; beating John Sosnowski in the Republican primary and William Donnelly in the general election.  Sosnowski was not a quitter either and ran for Congress an astonishing twelve times, although he only won the 1924 general election.

Congressman Clancy’s district had been slightly altered due to redistricting following the 1930 election and the Democratic tide, as it did with so many GOP congressional candidates and incumbents, doomed his candidacy, although he won a very respectable 47% of the vote in what was a dreadful year for Republicans.  The Fourteenth Congressional District was, according to the Detroit Free Press “as varied as one can find in Michigan”, which “took in the eastern portion of Detroit from Field and the river up Van Dyke to Eight Mile and east to the city limits” and also included the Grosse Pointes.

Carl Weideman went to Washington, D. C. to take part in the first Hundred Days of FDR’s New Deal.  Congressman Weideman’s support for President Roosevelt did not prevent him from being challenged once again inside his primary in 1934.  Evidently Weideman did not suit everyone inside his district as the Detroit Free Press recorded the congressman was “particularly a thorn in the flesh of the organization Democrats.”  Rabaut was a colorful lawyer, a Catholic with nine children, four of whom joined religious orders.  One son became a priest, while three daughters became nuns.  The Free Press thought Louis Rabault made the most of a “good singing voice and an affinity for God.”  A staunch Catholic, Rabault was horrified in the 1950s when a birth control proposal was being considered by Congress.  “My views are known,” Rabault barked.  “I’m dead against it.  It would create a bad example to a lot of little towns.”

The fight between Rabaut and Weideman, according to the Detroit Free Press was especially hard fought with “no quarter asked” by either side in “the stand-up-and-fight battle” between the opponents.  The primary election was a photo finish, with Rabaut winning by 471 votes.  Not surprisingly, the primary election was close enough that Congressman Weideman demanded a recount, which confirmed Rabaut as the winner.  The general election was easier with Rabaut polling over 62% of the vote against Republican John McPherson.  Louis Rabaut became a fixture inside Michigan’s 14th Congressional district and would remain in the U. S. House of Representatives until his death in 1961 with but one two-year interval.

Like his predecessor in Congress, Louis Rabaut had a habit of bucking the party leadership when it suited him.  The Detroit Free Press readily acknowledged Rabaut “frequently displayed an independence in Congress which at times must have annoyed Democratic leaders in Congress.”  Yet the Free Press believed it was Rabaut’s political independence that helped him with the folks back home, although the newspaper thought the key to the longtime congressman’s success with the voters was due to his personality and demeanor.  The Detroit Free Press described Louis Rabaut as “a warm, friendly man who possessed the common touch”, which the newspaper was convinced was “the chief ingredient of his political success.”

Not a shy man, Louis Rabaut apparently had a fine singing voice and was a soloist in the House of Representatives in 1946 for a service to commemorate those members of Congress who had recently died in office.  Rabaut was accompanied by his daughter, Joan Marie.  That same year, Rabaut’s son Vincent and daughter-in-law made him a grandfather for the first time.

Providing excellent constituent service to the people of his congressional district, Louis Rabaut was routinely reelected with large majorities until 1946.  The Democrats had enjoyed majorities in both houses of Congress since Franklin Roosevelt’s election in 1932; by 1946 Roosevelt was dead, World War II over and soldiers were returning home to their families.  Harry S. Truman had succeeded FDR and the scarcity of some products and the economy irritated many voters.  1946 proved to be a banner year for Republicans, who swept Democrats out of both the House of Representatives and the United States Senate.  Republicans picked up 11 seats in the Senate and 55 seats in the House.  One of the Democratic districts lost in the 1946 election was that held by Louis C. Rabaut.  Congressman Rabaut was stunned to lose to plumbing contractor Harold F. Youngblood.  The Detroit Free Press summarized the new GOP congressman as “a rough diamond type who works hard, follows the party line in Congress, and preaches small-business man’s doctrine.”

There was little doubt in anyone’s mind the sixty-two-year-old Louis Rabaut would run again in 1948 to reclaim his seat in Congress.  Rabaut was certainly acting very much like a candidate, serving as the principal speaker at the Annunciation church in the heart of his former Congressional district to honor a popular priest who had died and dedicated his life to helping homeless children.  Mrs. Rabaut was certainly doing her part for her husband, hosting a tea at their five-bedroom home for the Peter and Paul unit of the local Jesuit Seminary.

Running again in a presidential election year (albeit one which Harry Truman was expected to lose to New York Governor Thomas E. Dewey), Louis C. Rabaut handily defeated Congressman Harold F. Youngblood, winning by almost 57% of the votes tallied.  Youngblood proved to be a determined candidate and ran again for Congress in 1950, 1952 and 1956.  Evidently many Republicans inside the Fourteenth Congressional District did not believe Harold Youngblood would be the strongest candidate they could field in a general election, as he lost the GOP primaries in 1950 and 1952.  Finally in 1956 Harold F. Youngblood barely managed to scrape past his nearest competitor inside the Republican primary to win a rematch with Congressman Louis C. Rabaut.  Unfortunately for Youngblood, despite the highly popular President Dwight D. Eisenhower running at the top of the ticket, he fared little better against the deeply entrenched Rabaut than he had in his losing 1948 reelection campaign.  Eventually, apparently having tired of Michigan’s frequently brutal winters, Harold Youngblood retired to the warmer clime of Arizona and he ran for Congress inside the GOP primary in 1962, only to lose badly.

By 1959, Louis Rabault was ailing.  The Congressman was taken to Bethesda Naval Hospital after becoming ill in his office.  Doctors diagnosed Rabault as suffering from cerebral ischemia, a spasm in the small blood vessel in the brain.  Rabault’s stay in the hospital varied, depending upon which news outlet one believed, but it seems reasonably certain the Congressman was out of his office for several weeks.  According to one source, Rabaut returned to Capitol Hill after only two weeks, but the Detroit Free Press reported Congressman Rabaut needed seven weeks to recover from his illness.  As with every aging incumbent, Rabaut’s office attempted to minimize the episode.  A spokesman for Rabaut was quick to say the Congressman was “in wonderful physical shape” and there was no reason to believe there would be any recurrence of his ailment.  The spokesman added there was certainly not any permanent damage to the Congressman’s brain.

The seventy-three-year-old Louis Rabaut was easily reelected in 1960, winning roughly 63% of the vote against Republican challenger Lois V. Nair and several other candidates in the general election.  Death finally found Congressman Rabault while he was doing what he loved best: meeting and greeting people.  On Sunday, November 12, 1961, Congressman Louis Rabaut was attending a testimonial dinner honoring Thaddeus M. Machrowicz, who had just been appointed to serve as a federal judge.  Machrowicz had been a congressman from Detroit before being appointed to serve on the federal bench.  More than 1,000 people had gathered in the Knights of Columbus Hall in Hamtramck, Michigan to fete the former congressman.  As Rabaut started toward the podium to make his speech, he collapsed from a massive heart attack.  Dr. Raymond Suwinski jumped up and tried to revive the stricken congressman while paramedics rushed to the location.  Although Dr. Suwinski later said Rabaut’s breathing was restored when oxygen was administered, the Congressman was pronounced dead at 10:40 p.m. when he arrived at St. Francis Hospital in Hamtramck.  Doctors at the hospital had made every effort to save the life of the seventy-four-year-old congressman, massaging his heart and giving him oxygen for an hour and fifteen minutes before sadly concluding it was to no avail.

Although a lawyer by trade, Louis Rabaut had worked in real estate for some years before winning election to Congress.  A rough and tumble campaigner, who enjoyed people, Rabault represented, according to the Detroit Free Press, “a weird hodgepodge of the rich, the well-to-do and the poor of the 14th District.”  While Rabaut had been largely invulnerable at the polls, there was to be no political dynasty in his family, although his son and namesake Louis, Jr. tried.  The younger Rabaut had lost a campaign for the Michigan State Senate precisely because voters were wary he was attempting to position himself to succeed his father in Congress.  Louis, Jr. ran in the 1962 special election to replace his father and lost the Democratic nomination.