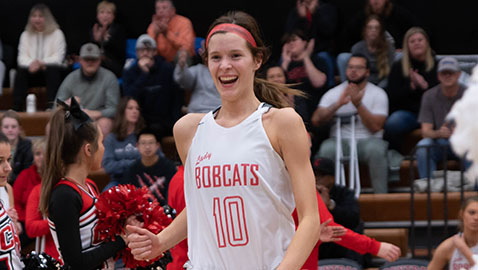 Mackenzie Babb has had a magical senior season for the Central High Lady Bobcats.

Babb, a center at Central and a four-year starter for the Lady Bobcats, has reached a pair of career milestones this year, and she now has high hopes for her team, which will start its postseason run when the District 3-AAA Tournament opens this week at Campbell County.

Tanika Smith is the only other player in Lady Bobcats’ history to record both 1,000 points and 1,000 rebounds.

Smith went on to play for the Lady Vols after an illustrious career in Fountain City and being named 1993 Tennessee Miss Basketball.

Babb knows the statistical plateaus are meaningful, but what made them more special for her was that she reached both milestones on Central’s home floor.

“It feels great but it hasn’t really sunk in yet,” she said. “I know that the only other player who did this was Miss Basketball. I had a lot of my friends in the stands.”

Throughout her life, Babb has been a three-sport athlete, competing in travel league softball, track and field and basketball.

But an injury made her decide that she should concentrate on basketball.

“My parents never really had the time to breathe,” Babb said. “I did track here and then I got hurt, so I decided to concentrate on basketball. I also played travel softball.

“I’ve played basketball since I could walk. I played in the Powell Peanut League.”

Basketball has always been a passion for Babb, who was a top middle school player at Gresham before heading to Central.

“Basketball, it’s like my happy place,” said Babb, who played her final home game against Black Oak Ridge rival Halls on Friday night. “But sometimes, it takes me away from my family because I’m always in the gym, even on Sundays after church.”

But there were some tough times for Babb.

“When I first started here, it was hard because I was the youngest player on our team,” she said.

While she never really considered quitting the game, things were tough and she credits Collins for helping her along during the hard times.

“(Collins) was always helping me and he was always encouraging me,” Babb said. “He’s a great coach, and he always knows what to do.

Individual accomplishments aside, Babb said her time playing scholastic basketball in Fountain City has been special as she’s enjoyed the company of her teammates. She was anticipating an emotional night Friday as she was interviewed earlier in the week.

“At Senior Night, I’ll cry because I’ve been playing with Lexi Pendergrass and Bethany. We’ve played together for years,” said Babb, who will play college basketball at the University of the Cumberlands in Williamsburg, Kentucky. “This team has a special bond. We always hang out together.

“We have lunch together and we go to the football games together.”

Babb said she remembers some lean days when she first arrived at Central.

“We were a team that couldn’t break a press, now we can break some pretty good presses,” she said.”

Collins said that this team has been a special one for him.

“Players like Mackenzie are always where they’re supposed to be,” he said. “These seniors are really special. I’ve known all three of them since I was at Gresham, teaching and coaching the boys team there.

“They take care of business in the classroom and you know that they’re not going to get into trouble.”

The career milestone of 1,000 points puts high school basketball players in top standing. The 1,000-rebound plateau is even rarer.

“That doesn’t happen very much and that just goes back to (Babb’s) hard work and dedication,” Collins said.