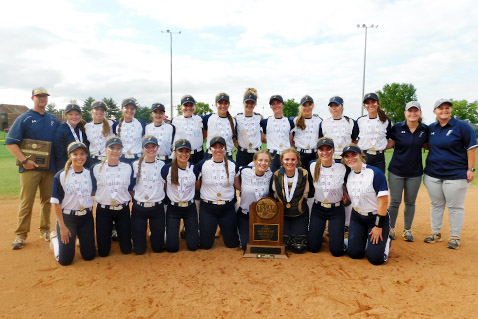 Back to back state titles are in the books for Farragut High’s softball program. Is a three-peat possible in 2023?

The Avery Flatford Era is over and the Lady Admirals’ record-setting pitcher will be doing her thing at Tennessee Tech.

The circle at James Bellamy Field on the FHS campus will no doubt have a different occupant next spring, but rising junior Emma Mactavish won’t be a newcomer. Although she made only a brief showing at the state tournament last week, she worked many meaningful games in the post-season run when Flatford had some shoulder issues.

The ball will be in Emma’s hands and Avery has helped her be ready for the so important starting job.

“I’m just really excited,” said MacTavish amidst the post-game celebration on Starplex Field No. 4 Saturday. “Avery has taught me so much. I just think we can carry that on to next year. It’s been really nice to look up to her and she’s an overall great person. It’s been nice to have her right there with me.”

“Pitching obviously, like with my mechanics sometimes, she will tell me when something’s off, and then just being a good teammate. She’s always there for me and it’s really nice to have that. And she’s always keeping me confident.”

With Flatford not 100 percent healthy, MacTavish was the winning pitcher in the do-or-die losers’ bracket final game at Maryville. The Lady Admirals swung the bats well that day and Emma shut out the Red Rebels six of the seven innings in the 11-4 victory.

“We have full confidence with Emma on the mound,” Farragut Coach Nick Green said after that game.

MacTavish’s experience of starting several games this season will definitely be an advantage for Farragut next season. Other starters that will be returning are first baseman Hailey Nichols, who also has experience as a catcher; shortstop Ava Guzowski, who hit in the No. 3 hole; third baseman Delaney Shrader and outfielder Addison Pressley, the team’s leadoff batter.

The Lady Admirals (43-3-1) sailed through the state tourney in Murfreesboro and methodically defeated Clarksville 4-0 in the finals behind the pitching of Flatford, who flirted with a no-hitter before Breanna Snyder led off the bottom of the seventh with a line drive single to right field. She struck out 10 and walked three in her prep finale.

Guzowski led Farragut at the plate. With the game scoreless, she led off the fourth inning with a double off the left field fence and scored on a single by Caywood. Guzowski added an RBI single in a two-run fifth. Musco singled and scored on a hit by Shrader to complete the scoring in the sixth,

Comparing the 2021 season to this year, MacTavish said: “I think this year was a little different than last year because this year we didn’t need to prove anything. Last year we had already proved we could do it. This year was just coming back and enjoying the experience while also working hard.”

MacTavish is confident that Farragut can make it back to state.

“I definitely think we can make it back to this point next year,” she said. “We’ve got the skill level. And I think this year, compared to last year, we’ve grown so much more as a team. We get along really well and work so well together. And I think we are going to keep growing.”

MacTavish also feels the Lady Admirals have some capable starters in the wings and good young players coming up in the program.