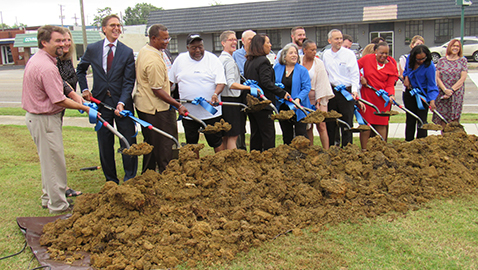 The face of Magnolia Avenue in East Knoxville has changed a few times over the years. The street, the home of iconic products like Swan’s Bakery and the home of Mello Yello, is about to change again.

Once a thriving commercial and residential area on the trolley line Magnolia Avenue began to decline and for years the city has been looking to improve the neighborhood, much as it has been and is doing along Cumberland Avenue and North Broadway. That effort broke ground Thursday as Mayor Rogero and others officially kicked off the first phase of streetscape improvements.

Phase One, which will upgrade Magnolia Ave. from Jessamine to Myrtle Street, is expected to take until the end of next year and then Phase Two begins improvements from Myrtle to Bernard Street. The mayor has pledged $5 million for Phase Two and about $4.4 million for the initial improvements.

Planned during the first phase are new streetlight posts with LED lights, new crosswalks, sidewalks, bike lanes, pull-offs for city busses, trees lining the avenue, medians, and a gateway monument welcoming people to the neighborhood. One lane of traffic on both sides of Magnolia Avenue will be maintained during the project.

Eventually both phases would include six blocks. Critics of the plans, introduced and altered over the last couple years of public meetings, say the improvements don’t go far enough along the route, start at the portion nearest the city center, and may also eventually drive away locally owned small businesses there.

“Investment opportunities by minorities and others would help to revitalize the area and restore Magnolia and that part of East Knoxville to its former glory, along with the redevelopment of Walter P. Taylor Homes and other projects, such as the Williams Creek Greenway, the Botanical Gardens and improvements at Chilhowee Park and Zoo Knoxville,” he said.

“This is an exciting day,” Mayor Madeline Rogero told a large crowd prior to the ground breaking on Magnolia Thursday.

She went on to applaud the various city and state agencies involved in the long effort to design and start a streetscape project there. She recognized the various officials who helped during the planning, the many neighborhoods who gave input, and TDOT for working with the city to permit improvements along Magnolia, which is a state route.

“That’s just part of a village that it takes to do something like this,” she said.

Rogero said the two phases of improvements should attract new businesses. She said the site where the shovels were located on the corner of Jessamine and Magnolia is where the new monument sign will be located.